FOR MAURY DANN, EVERY DAY IS “PAYDAY”

In a rare starring role, Rip Torn plays Maury Dann, a hard-living country singer traveling the Deep South honky tonk circuit. Dann’s good ol’ boy smile charms even passing fans, but in private he is a greedy, entitled, and pitiless tyrant ruling from the back seat of a Cadillac sedan. Set over a day and a half, Payday reveals Maury’s unrepentant selfishness and cynicism, bedding young fans, popping pills, and casting off members of his entourage once they have outlasted his needs. Dann’s self-serving and hedonistic ways come to a head in a late night parking lot scuffle, transforming his megalomania into inevitable self-destruction.

Music critic and Payday producer Ralph Gleason declared that the objective of this staggeringly jaundiced portrait was a desire to provide an honest portrayal of life in the country music business. Under the direction of Daryl Duke (The Silent Partner), Payday rejected the polished image of country music, pointed the way toward the approaching outlaw country movement, and placed a spotlight on the magnetic presence of Rip Torn.

END_OF_DOCUMENT_TOKEN_TO_BE_REPLACED 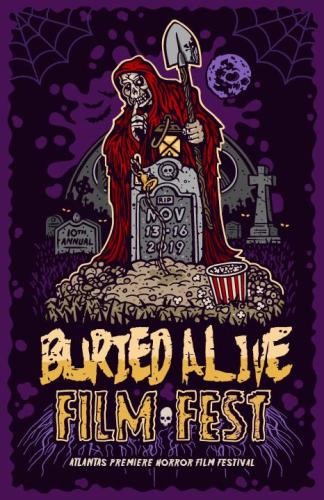 The 2019 Buried Alive Film Festival kicks off today with its Sinema Challenge screenings. Four days of feature and short film programming commence tomorrow with the “First Shovel in the Grave is Always Best!” Shorts Block and the hits just keep coming after that. In anticipation of BAFF, MMC! offers ten great reasons to get Buried Alive this Thursday and Friday. Laughs, scares, and some stomach-churning content awaits, so don’t miss it!

Check out BAFF’s schedule for screening details and check out my Letterboxd list of the Fest for MMC! reviews.

Full disclosure: I haven’t seen Joe Begos’ VFW (2019). That might make it an odd place to start for recommendations, however reviews for VFW have been uniformly positive. This throwback action film pits a collection of war veterans (and an innocent teen) against a drug dealer and a horde of mutant junkies. Recalling John Carpenter’s Assault on Precinct 13 (1976), Begos offers a intricate plot and a bounty practical effects, creating a gory, siege film spectacle. Word is that VFW is best seen with a crowd and one will surely be waiting at the 7 Stages Theatre on Friday at 8 pm.

END_OF_DOCUMENT_TOKEN_TO_BE_REPLACED

MMC! returns to its program of seasonably appropriate short films with Maarten Groen’s Arrêt Pipi (2015), a gialli-inspired commission by VPRO, a Dutch public broadcaster. Sarah (Bo Maerten) and Bram (Benjamin Moen) stop to use a gas station restroom in the woods of Wallonia and find themselves fighting for their lives. This slickly made short is inspired by the urban legend of Aka Manto, a ghost that haunts Japanese washrooms by offering visitors red or blue toilet paper with deadly effect. Arrêt Pipi had a dark, absurdist humour that invigorates its spot-on exercise in genre with a welcome sense of play and vitality.

Designed with the film lover in mind, SHOUT SELECT shines a light on films that deserve a spot on your shelf. From acknowledged classics to cult favourites to unheralded gems, SHOUT SELECT celebrates the best in filmmaking, giving these movies the love and attention they deserve.

Jonathan Demme adapts the stranger-than-fiction life of Melvin Dummar to the big screen, celebrating the fair-weather fortunes of an affable everyman who offers a late-night ride to the world’s richest man, Howard Hughes. Dummar returns to his workaday life, struggling to get ahead with dead-end jobs and game show fantasies until a letter arrives out of the blue naming him as a possible heir to Hughes’ fortune. Being poor was hard, but Dummar discovers in this slice-of-life satire that the prospect of being rich is even harder.

Melvin and Howard is a feel-good story about tough luck starring Paul Le Mat and Jason Robards as Melvin Dummar and Howard Hughes, a pair of scruffy outcasts at opposite ends of the economy. Featuring an Academy Award-winning screenplay by Bo Goldman and supporting performances by Pamela Reed, Michael J. Pollard, Gloria Grahame, Charles Napier, Dabney Coleman, and Mary Steenburgen in an Oscar-winning role as Melvin’s first and second wife, Jonathan Demme’s tale of hard work and easy money is an under-appreciated American classic.

END_OF_DOCUMENT_TOKEN_TO_BE_REPLACED

MMC! wraps up its review of the National Film Board of Canada with this penultimate post on the NFB’s first blockbuster, Royal Journey (David Barstow, Roger Blais, and Gudrun Parker, 1951). This 54-minute document of Princess Elizabeth and the Duke of Windsor’s monthlong visit across Canada and to Washington, D.C., is weighed down by some hokey narration, but it is a stunning record of the era, beautifully expressing the complex regionalism of Canada and standing as the first feature film shot on Kodak’s (then experimental) 35 mm Eastman colour film stock. Its presentation is full of newsreel immediacy, showing Canadian life, in nearly all its forms, in vibrant, shocking colour, yet the film is full of history and alludes to the young nation’s place in a larger geo-political context. And the short feature offers some fascinating moments in Canadiana, such Princess Elizabeth’s visit to the Winnipeg Ballet, an institution she would grant “Royal” status to less than 2 years later. (Admittedly, we Canadians are probably as weather-obsessed as the film would have you believe.) Royal Journey was a massive success for the NFB, seen by 350,000 people in its first week and 2 million people over the next 2 years, winning a BAFTA for Best Documentary in the process.

As per the NFB (with only some inaccuracies):

A documentary account of the five-week visit of Princess Elizabeth and the Duke of Windsor to Canada and the United States in the fall of 1951. Stops on the royal tour include Québec City, the National War Memorial in Ottawa, the Trenton Air Force Base in Toronto, a performance of the Royal Winnipeg Ballet in Regina and visits to Calgary and Edmonton. The royal train crosses the Rockies and makes stops in several small towns. The royal couple boards HCMS Crusader in Vancouver and watches native dances in Thunderbird Park, Victoria. They are then welcomed to the United States by President Truman. The remainder of the journey includes visits Montreal, the University of New Brunswick in Fredericton, a steel mill in Sydney, Nova Scotia and Portugal Cove, Newfoundland.

No celebrity or movie star appearance within the National Film Board of Canada’s library seems to generate more pride by the NFB than Buster Keaton’s appearances in The Railrodder (Gerald Potterton, 1965), a 24-minute comedy short, and Buster Keaton Rides Again (John Spotton, 1965), a 55-minute behind-the-scenes documentary. Buster’s films of the 1920s were undergoing something of a reappraisal at the time, and the NFB took up the opportunity to offer Keaton a chance to return to his roots as a figure of silent comedy riding the rails, this time across panoramic Canadian landscapes. Keaton turned 69 during the shoot and his age shows a bit on The Railrodder, whose more modest gags underwhelm at times. That said, we still love the short film’s ending, and most Keaton fans admire The Railrodder for producing Buster Keaton Rides Again, a fascinating companion piece that offers a portrait of the aging comedian, still insightful about his art and dogged in his work.

As per the NFB:

This short film from director Gerald Potterton (Heavy Metal) stars Buster Keaton in one of the last films of his long career. As “the railrodder”, Keaton crosses Canada from east to west on a railway track speeder. True to Keaton’s genre, the film is full of sight gags as our protagonist putt-putts his way to British Columbia. Not a word is spoken throughout, and Keaton is as spry and ingenious at fetching laughs as he was in the old days of the silent slapsticks.

As per the NFB:

In this film, Keaton rides across Canada on a railway scooter and, between times, rests in a specially appointed passenger coach where he and Mrs. Keaton lived during their Canadian film assignment. This film is about how Buster Keaton made a Canadian travel film, The Railrodder. In this informal study the comedian regales film crew with anecdotes of a lifetime in show business. Excerpts from his silent slapstick films are shown.