These are sad days at MMC! Dave Barber, filmmaker and beloved programmer of Winnipeg’s Cinematheque, passed away earlier this week at the age of 67. Dave was a champion of Canadian and independent cinema and a tireless advocate for his theatre and the films it featured.

I met Dave at a get-together hosted by a mutual friend eight years ago. Attended by professional, semi-professional, and amateur pop culture nerds, we were invited to share lists of our favourite films and Dave’s list expressed his love of music as well as his love of cinema at its biggest and most minute.

In the years that followed, we would watch movies together when we ran into each other at a screening, we would text about programming ideas and other movie stuff, and we would share festival discoveries. I would give him rides home when he needed them, he would hook my son up with Godzilla stuff, and my wife would restrain her urge to make him a sandwich. When I discovered he was in the hospital, I sent him a message wishing him well and asking him to reach out once he recovered, hoping he would find the message once he was discharged. Sadly that won’t happen, but I’m very grateful for the time I got to spend with Dave and I wish him the best on whatever new project he’s now moved on to.

In celebration of Dave, MMC! offers this brief tribute to the man on screen and there’s no better place to start than Dave’s 2014 short film Will the Real Dave Barber Please Stand Up?, a hilarious account of Dave being awarded a Queen’s Diamond Jubilee medal.

END_OF_DOCUMENT_TOKEN_TO_BE_REPLACED

Criterion Collection: 1000 Spines (2019) is a supercut of the first order and it’s full of things that MMC! loves: those framing devices using Rushmore (Wes Anderson, 1998), My Dinner with André (Louis Malle, 1981), and All That Jazz (Bob Fosse, 1979); that piano rendition of Katy Perry’s “Roar,” that Beastie Boys transition leading into the raucously shifting panels of the Collection’s samurai cinema, the iconoclastic rebellion of “A Quick One, While He’s Away” celebrating cinema’s icons and rule breakers, that towering kaiju crescendo. Heck, Keogh even slides in some great shots of Jellyfish Eyes (Takashi Murakami, 2013)! Keogh, who works for Criterion doing marketing and advertising, took 10½ months to create this 16-minute opus, but that’s not all. In anticipation of the video, Keogh also created a 4-minute teaser celebrating some of the Collection’s fanciest footwork. If you missed this little gem given the hubbub over 1000 Spines, be sure to check it out as well.

END_OF_DOCUMENT_TOKEN_TO_BE_REPLACED

I feel like 2018 is the year that the internet had enough of people saying that Die Hard (John McTiernan, 1988) is a Christmas movie and I’m thankful. Don’t get me wrong; I love me some Die Hard but the self-congratulatory smugness of the Die Hard-as-Christmas classic declaration had its day long ago. To both celebrate and hopefully memorialize this effort in a once clever and now tired idea, MMC! wishes everyone a safe and happy holidays with Brad Neely’s 2009 Baby Cakes short, The In-House Carol, a crudely fashioned and hilariously daft portrayal of Die Hard love gone too far.

SEASON’S GREETINGS TO ALL!!!

In the neon glow of 1979 Paris, Anne (Vanessa Paradis) makes her living producing low-budget gay pornography and struggles with the heartbreaking rejection of her longtime lover and current film editor Loïs (Kate Moran). She aims to inspire Loïs back into loving her with increasingly ambitious productions, even using the murders of her actors by a leather clad killer as inspiration, but as the killings continue and her troupe becomes increasingly cautious, Anne assumes the role of amateur sleuth investigating the secret of the mysterious figure that stalks her company. Deftly blending Parisian porn silliness and Italian slasher conventions with a pulsing score by electronic music group M83 and a perfect period production design, Knife + Heart is an affectionately queer tribute to cinema’s body genres and to love in its many forms.

END_OF_DOCUMENT_TOKEN_TO_BE_REPLACED

The Saskatoon Fantastic Film Festival’s second day was unusually specific in its program, devoting itself to short films that explored “innocence being encroached upon by outside forces” and a pair of horror-thriller features set around the sex industry. It was an impressive night of screenings, but also one that certainly made demands of its audience.

The “Paradise Lost” block of shorts was long on atmosphere and scares but slim on explication. Most films chose to grab their shocks and get out rather than flesh out their worlds. Faye Jackson’s The Old Woman Who Hid Her Fear Under the Stairs (2018) recalled Bobby Miller’s The Master Cleanse (part of SFFF’s program from 2016 and now titled simply The Cleanse). The short considers the situation of its title character who extracts her sense of anxiety out of herself, hides it in a tin, and faces down some dark, ominous threat that stalks her outside her home. Jackson’s film is wonderfully constructed, full of humour and dreadful tension, and its quality therefore demands more of itself, needing to unpack its conflict and its resolution before letting its credits roll. And the same could be said of other shorts in the block. Milk (Santiago Menghini, 2018) is a chilling tale of a boy trapped between two unsettling maternal figures and choses aesthetics over explanation. Wild (Morgana McKenzie,  2018) is a pastoral fantasy about a girl’s encounter with a magical, deadly, and ultimately unresolved female figure in her uncle’s cornfield. Saturn Through the Telescope (Dídac Gimeno, 2018) follows a boy’s efforts to watch a scary movie at home and is a slickly made and energetic short, while Make a Stand (Camille Aigloz, Lucy Vallin, Michiru Baudet, Simon Anding Malandin, Diane Tran Duc, and Margo Roguelaure, 2017) is a gorgeously animated film set in pre-Columbian Mexico and that seems to tease a supernatural spectacle that never arrives. Uncertainty is a great tool of the macabre, but it’s best used as a lacuna where meaningful questions spring forth. These shorts are uniformly affective and expertly fashioned, sure to be enjoyed by viewers. My only wish is that these films more fully met their narrative challenges as well as the aesthetic ones.

END_OF_DOCUMENT_TOKEN_TO_BE_REPLACED 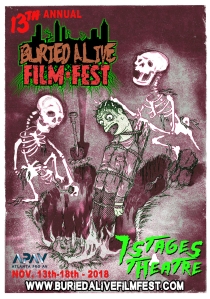 Overwhelmed with a bounty of goodness, MMC!‘s previews can only be more important, pointing the path from mere goodness and toward greatness. Here, dear readers, are five MMC!-approved reasons (that are actually nine reasons) to BAFF this Saturday: