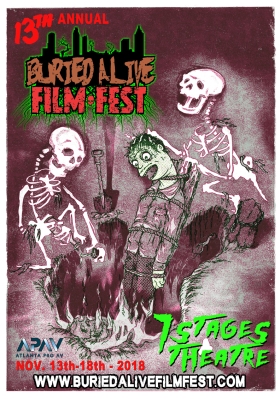 MMC! will cover the 2018 Buried Alive Film Festival by previewing each day of its programming, focusing on those wonderful films that achieve MMC!-approval!

With BAFF’s emphasis on short films and a full program of these titles playing each day the Fest, there’s hardly any limit on the number of good reasons to attend! BAFF kicks off on November 14 with a screening of the films made as part of its 3rd annual Sinema Challenge, a 13 day filmmaking challenge that sees its participants randomly select a horror genre and a subject from a deck of Cards Against Humanity cards and then make a movie based on their selections.

The Fest’s main program starts on November 15 with a feature, a supporting short film, and BAFF’s first short program: “For the Love of the Undertaker.” For those counting, that’s thirteen separate works in a single evening of film fest-ing! There’s lots to enjoy, but here are MMC!‘s five favourite reasons to BAFF next Thursday.