Aw yeah! The Fantasia International Film Festival has announced its second wave of titles and it’s full of intriguing movies. Fantasia’s emphasis on Japanese cinema really becomes clear with this latest batch of announcements and MMC! is particularly impressed with the array of animated titles in this year’s edition! Cryptozoo! Junk Head! Pompo: The Cinéphile! Poupelle of Chimney Town! Fortune Favors Lady Nikuko! The Spine of Night! And a documentary on the great Satoshi Kon — Satoshi Kon, The Illusionist!

Here is Fantasia‘s press release for its second slate of announcements!

Wednesday, June 23, 2021 // Montreal, QC​ — The Fantasia International Film Festival will launch its 25th edition this summer as an exciting virtual event composed of scheduled screenings, on-demand library, panels, and workshops, taking place from August 5th to August 25th. The festival will be accessible across Canada, geo-locked to the country, and will maintain unique film admittance quantities in line with the cinema experience.

Fantasia is thrilled to reveal a second wave of programming and will return in late July with a third and final line-up announcement, including features, virtual events, and juries.

In celebration of Fantasia’s 25th anniversary, the international film festival will be hosting a special event screening of the eagerly awaited Warner Bros. Pictures superhero action adventure THE SUICIDE SQUAD. The in-person screening will be held on August 4 at Montreal’s historic Imperial Theater (birthplace of the fest) and tickets will be available to the public. The film releases in theaters on August 6.

THE SUICIDE SQUAD is written and directed by long-time Fantasia friend James Gunn, who first attended the fest in 1997 and whose previous comic book blockbuster GUARDIANS OF THE GALAXY made its Canadian Premiere at Fantasia in 2014. Gunn’s no-holds-barred take on the DC team-up finds Super-Villains Harley Quinn, Bloodsport, Peacemaker and a collection of cons incarcerated at Belle Reve prison joining the super-secret, super-shady Task Force X as they are dropped off at the remote, enemy-infused island of Corto Maltese.

END_OF_DOCUMENT_TOKEN_TO_BE_REPLACED

Last year, MMC! had an absolute blast with the Fantasia International Film Festival’s virtual edition and so it’s exciting to see the Fest return in 2021 with another online edition. FIFF’s first wave of title announcements arrived today and things look very promising with films teased across the Festival’s various sections. And with an added emphasis on Japanese cinema for this 25th edition of Fantasia (and adorable Lone Wolf and Cub-inspired art), August can’t come fast enough for MMC!

Here is Fantasia‘s press release for its initial slate of announcements!

END_OF_DOCUMENT_TOKEN_TO_BE_REPLACED

Municipal rivalries, bedroom community resentments, and capital city snobbery are made fantastically farcical in Hideki Takeuchi’s adaptation of Mineo Maya’s cult manga. In this alternate Japan, Tokyo is a luxurious metropolis surrounded by impoverished prefectures living in near feudal-era conditions. Momomi Dannoura (Fumi Nikaido), son of Tokyo’s governor and possessor of striking feminine beauty, rules a baroquely decorated academy and disdains the presence of any non-Tokyoites, particularly those from the Saitama prefecture. The arrival of the mysterious transfer student Rei Asami (GACKT) sparks an undeniable attraction in Momomi and starts a war of liberation between the disrespected prefectures and the opulent megacity. Can love and regional pride overcome big city corruption?

Fly Me to the Saitama is Japanese lunatic satire at its finest, balancing a storm of local inside jokes with universal tensions between slick urbanites and commuter belt wastelands. In between, the film stuffs wacky battles, gender-bending characters, outlandish wigs and costumes, and plenty of historical anachronisms all delivered with disarmingly earnest performances from a stellar cast. Book your ticket to this award-winning, box office smash and accept your Saitamafication!

END_OF_DOCUMENT_TOKEN_TO_BE_REPLACED

AS AMERICAN AS APPLE PIE AND PUNK ROCK

In a dreary Michigan suburb, aggro punk rocker Simon (Kyle Gallner) finds himself on the run after a bout of arson and a close call with the police. A chance encounter with eccentric and socially awkward Patty (Emily Skeggs) provides him a place to hide from the law, though she fails to realize that her new friend is the anonymous lead singer of her favourite band. The pair embark on a series of misadventures and while their radically different personalities make them an unlikely duo, Simon and Patty realize that they have a lot more in common than first expected.

Dinner in America is an ode to the ’90s Nebraska punk-scene of writer-director Adam Carter Rehmeier and a hilarious underdog love story boosted by a generous helping of absurdity and some instantly quotable dialogue. Set to the beat of brilliant original songs and perfectly casting Skeggs and Gallner as a suburban Bonnie and Clyde, Dinner in America is a wild and empowering ride through the places and people of Middle America — in all their peculiar forms.

END_OF_DOCUMENT_TOKEN_TO_BE_REPLACED 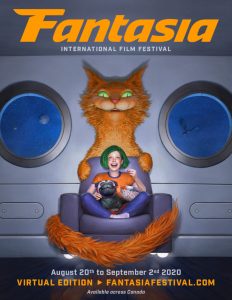 The 2020 Fantasia International Film Festival and its inaugural online edition officially reached its conclusion earlier this month and MMC! is so grateful to have been given the opportunity to participate. Scores of films were screened and new favourites were discovered. MMC! must thank Fantasia’s outstanding staff for their unbelievable work and their smoothly run festival. Shout-outs to Steven, Alyssia, Lorenzo, and Marie-Jade! Jusqu’à l’année prochaine!

This year’s Fantasia was full of very entertaining films and whittling them down to a selection of favourites wasn’t easy. Depite this challenge (and because I’m a consummate professional), here are MMC!’s twelve favourite films from the 2020 FIFF!

There was no film I more purely enjoyed than Adam Carter Rehmeier’s Dinner in America. A tribute to the director’s ’90s-era Nebraska punk scene, Rehmeier creates a wonderfully antagonistic, feel good rom-com that matches Simon, a drug-dealing, bio-pimping, stridently punk arsonist, with Patty, an overly sheltered, overly medicated, dim bulb fashion disaster. Their suburban Michigan environs are enjoyably flat, most frequently centred around cringe-inducing meals, but the pair bring out the nuances in each other that create fuller, even likeable, people. In true punk spirit, there are no engineered misunderstandings, no changes of heart, and no makeovers. Simon and Patty are just two unusual people who already adore each other (even if they didn’t already know it) and are happy to flip off the rest of the world in exchange for a few memorable days of hell-raising. And if that weren’t enough, Dinner in America brought Fantasia’s most magical single moment, a goosebump-raising original song that confirms the film’s brilliance on four-tracks. This is an aggressively adorkable romance and a surprising demand for punk rock’s antiestablishment voice during these tense times. (Where are you punk rock?) In a just world, there would be a generation of high schoolers and college kids that call Dinner in America a touchstone film. Bang your head and warm your heart, dum dum.