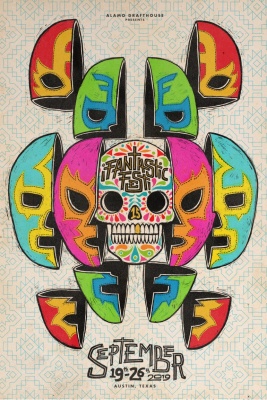 The 2019 Fantastic Fest in Austin, Texas, announced its first wave of titles late last month and a second wave of titles earlier today. The Festival is shaping up nicely with an exciting line-up of expectedly peculiar movies. MMC! is stoked for some of these films, so let’s take a look at a dozen bonkers trailers (and read some brief Fantastic Fest summaries) before this Tuesday runs out!

(MMC! doesn’t have any plans to be around Austin during September 19 to 26, but if anyone wants to throw some press credentials at our lowly corner of the blogosphere, MMC! wouldn’t stop you!)

Opening night of Fantastic Fest kicks off with the premiere of Taika Waititi’s JoJo Rabbit (2019). This anti-hate satire apparently made Disney execs less than comfortable during a screening last week and reports state that the studio is more than a bit nervous about this inherited Fox project. That alone make JoJo Rabbit sound worth its ticket price!

“Writer-director Taika Waititi (THOR: RAGNAROK, HUNT FOR THE WILDERPEOPLE), brings his signature style of humor and pathos to his latest film, JOJO RABBIT, a World War II satire that follows a lonely German boy (Roman Griffin Davis as JoJo) whose world view is turned upside down when he discovers his single mother (Scarlett Johansson) is hiding a young Jewish girl (Thomasin McKenzie) in their attic. Aided only by his idiotic imaginary friend, Adolf Hitler (Taika Waititi), Jojo must confront his blind nationalism.”