Martin (Edward Rowe) is a cove fisherman without a boat. His brother has repurposed their father’s vessel as a tourist tripper catering to vacationers and stag parties. Their childhood home has been sold for London money and transformed into a summer getaway, displacing Martin to public housing above the harbor. As Martin resists the erosion of local traditions and industries, the summer season brings increasing tensions between the locals and newcomers to a boiling point, leading to tragic consequences. Stunningly shot on a vintage 16mm camera using monochrome Kodak stock, Mark Jenkin’s Bait is a timely and funny, yet poignant film that gets to the heart of a community facing up to unwelcome change. 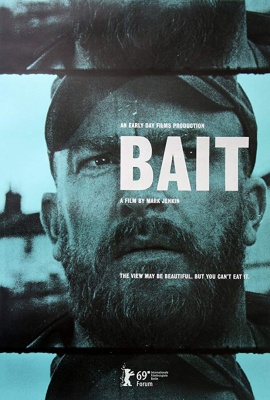 Mark Jenkin’s Bait (2019) offers a bespoke vision of a community in flux through the figure of Martin Ward (Cornish actor/comedian Edward Rowe), a gruff, taciturn fisherman. Ward’s unnamed Cornish village is caught in the throes of London money and summertime vacationers. The Ward family’s skipper’s cottage has been sold to the upper class Leighs, Tim and Sandra (Simon Shepherd and Mary Woodvine), who use it as a vacation property and short-term rental business. Martin’s brother Steven (Giles King) now uses their father’s fishing boat as a tourist tripper hosting sightseers and bachelor parties. Martin is left to live in public housing overlooking the wharf, setting nets along the shoreline with his nephew Neil (Isaac Woodvine) during low tide in hopes of catching a handful of fish and feuding with the Leighs over his use of their privately owned parking spot on the street, all the while struggling the squirrel away a few extra bills in a beat-up biscuit tin to eventually buy a boat of his own. Jenkin, a native of England’s southwest tip himself, grew up on seasonal reports of tensions between local communities and rich holidaymakers along Cornwall’s north coast and he imagined a more prolonged conflict for his film. As described by the filmmaker:

It’s about all the hurdles that are now in place for anybody who wants to do anything that’s a traditional industry, in a world of leisure and gentrification — and the rise of the ‘pretty committee’ — especially in places like Cornwall, where it’s all about aesthetics and lifestyle, rather than people being able to live in the way they have for thousands of years. It’s about people seeking out a living — there are people seeking out a living all over the world — and about the fishing community, but it’s also about class war.

Bait depicts subtle clashes of culture through the Leighs’ use of fishing equipment as regional home décor (“Ropes and chains — like a sex dungeon”), the changing clientele of the local pub (“There’s one them over there who’s so posh, I thought he was speaking German”), and a budding romance between Neil and the Leighs’ daughter Katie (Georgina Ellery), much to the chagrin of her brother Hugo (Jowan Jacobs). Battles over boundaries stand out as well. In addition to the skirmishes over parking spots, Hugo claims the pub’s pool table as his privilege, rejecting the assertion of barmaid Wenna (Chloe Endean) that “winner stays” is the community standard that must be respected. Despite Martin’s assertion to the Leighs that “you bring everything with you and then take it all with you when you leave” and that “you invest your money in the Maldives, you prancing Lycra cunts,” Jenkin’s view of the conflict over non-local wealth remains ambivalent. Martin complains but still sells his modest catch to the local pub as only it can afford his mark-up by passing the cost on to the vacationers. And the vacationers themselves are sold a lie as well, buying a relaxing weekend stay in a quaint fishing village without expecting the noise of boats chugging in the harbour at the morning tide. 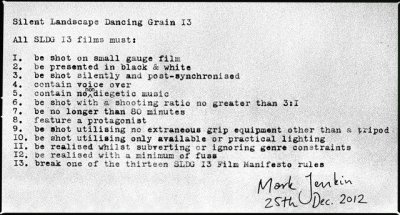 Notwithstanding its obvious economic, cultural, and geographic conflicts, it was an accident of subtitling at the 2019 Berlin International Film Festival that labelled Bait as a “Brexit film.” Without input from Jenkin, the German subtitler translated for the Berlinale audience a background news report discussing Brexit, inadvertently bringing the subject to the fore. Jenkin originally began writing Bait in 1999, long before Cornwall supported the “Leave” vote in 2016. Still, the filmmaker did have the foresight to not specify his community, avoiding any criticisms of his depictions by using an amalgam of locations to create Bait’s fishing village: a harbour in Charlestown, a housing estate in Sennen, the Admiral Benbow Pub in Penzance, and the grounds of the Newlyn School of Art. These real locations, coupled with the film’s black and white palette, its Academy ratio framing, and its archival texture refer back to Britain’s realist traditions in documentary, docudrama, and the British New Wave. Bait is full of kitchen sink realism and Martin stands as the perfect angry  middle-aged man. The film’s distinctive look reflects Jenkin’s “Silent Landscape Dancing Grain 13” manifesto, a set of guidelines designed to keep processes simple, ambitions in check, and expenses low. Using small gauge film, shooting silently, using only post-synch sound, and abiding other restrictions (as well working within financial cuts that saw the film lose one of two budgeted boats), Bait found its clarity of purpose and vision with brilliant effect. 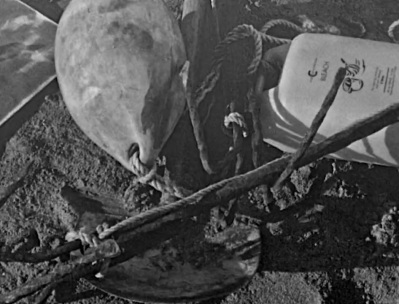 With all respect to Edward Rowe who is perfect in the lead role, the star of Bait is the film’s plastics. Grubby, grainy, and distressed, the film resembles the type of aged material usually the domain of Bill Morrison. Jenkin used a pair of Bolex H16 cameras (one for slow motion footage shooting at 54 frames per second), one 26mm lens (good for close-shots of actors), and a yellow filter (to enhance the grain). With a camera set on a tripod, Jenkin could shoot for 27 seconds, and with one hand holding open the shutter, his other hand was free to pan or pull focus, but not both. He filmed once, then again for safety, and rounded out his roll of film with shots of hands and feet that would later serve to cover Bait’s transitions. Jenkin shot 129 rolls of film (13,000 feet or 4½ hours of material) and took three months to develop it, passing 100 feet of film at a time through warm developer by hand. Bait constantly declares its handmade origins. The image flickers due to the inconsistent speed Jenkin wound the film. It shows scratches from being run under a tap and fibres cast off by Jenkin’s sweater. At times, the film sparkles from pollen that attached to the emulsion when Jenkin left his studio door open and it solarizes in places where Jenkin opened the rewind tank’s inspection window. Bait’s editing is appropriately choppy and its post-synched/post-dubbed sound only elaborates on its primitive charisma further. 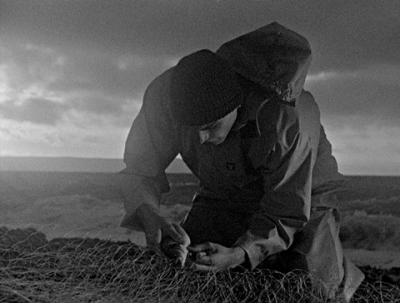 Jenkin is particularly fond of a description of his films as “horror films without any horror.” As James Baxter observes, Bait is a kind of ghost story. Martin is haunted by his family traditions and the film does dramatize his existential disappearance. Its Cornish fishing village often looks unnervingly empty and Martin’s delivery practice of leaving his catch hanging from the front doors of his clients has a conspicuous absence and loneliness about it. For many, Jenkin’s unusual presentation creates a disquieting, disconnected, and uncanny effect that draws comparisons to David Lynch and Nicolas Roeg, however the film also evokes the dreamy unreality of Maya Deren and Jean Cocteau. With its over-determined, out-of-time attention to hands, exchanges of money, and confrontational gazes, as well as moments of plainly presented transcendance, Bait particularly evokes an acknowledged influence on Jenkin, Robert Bresson. Comparisons to Guy Maddin also abound likely for Bait’s anachronistic style, however the Maddin-esque sensibility of Bait is also underpinned by Jenkins’ periodic tendency for the nonlinear as a means to reflect human consciousness, a technique Maddin calls “scrolling” and frequently employs in his work.  The movie’s merger of film-forward impressionism and quasi-reportage expresses Jenkin’s admiration for Derek Jarman, who once remarked, “I’m not an experimental filmmaker, I just make documentaries.” Jarman simply documented his own mind on film and that same principle seems to have informed Jenkin and Bait (even if it results in a strange brew that Peter Bradshaw approvingly describes as “an episode of EastEnders directed by F. W. Murnau”). 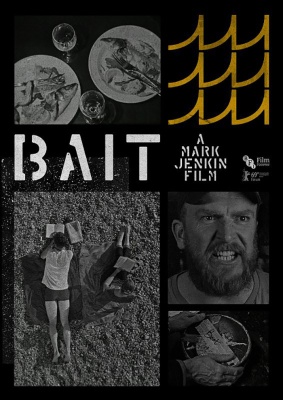 Jenkin’s film proved to be a surprising success in UK theatres following its popular debut at the Berlinale and it became an 11th hour candidate for best British film of the 2010s. This small work, shot with friends and family and co-produced in association with a university film school, won multiple festival prizes, was nominated for the Outstanding British Film BAFTA, and won Jenkin and his two producers the BAFTA for Outstanding Debut by a British Director, Writer, or Producer. A very solid BFI Blu-ray has been released in the UK, however Bait has yet to officially reach North American shores. MMC! would love to see this modern British masterpiece stamped with a wacky “C” and this alternate poster for the film seems ready-made for a Criterion Collection edition. And who knows? With Jenkin’s next film slated to be a Cornish horror film called Enys Men, perhaps we might see Jenkin return with another Criterion contender (likely an October release) or maybe a potential Arrow Video title!

Credits: This imagined Criterion edition ports over from the BFI Blu-ray the commentary, the Q&A, and the short films. The behind-the-scenes film shot by Falmouth film students and the Gwenno alternate score both exist and so those have included as well. The cover summary combines the synopses taken from the BFI release and the film’s website.

This post was informed by Bait’s website, Mark Kermode and Peter Bradshaw‘s reviews for The Guardian, Falmouth University’s article on the film, British Cinematographer’s article on the film, Ian Mantgani’s review for the BFI, James Baxter’s review for PopMatters, Darren Hayman’s article for The Quietus, Graeme Stout’s article for the Walker Art Center, the article posted at the Kodak website, P. Stuart Robinson’s essay for Montages Magazine, and interviews of Jenkin by Josh-Slater Williams for Filmmaker Magazine, Chloe Lizotte for Film Comment, Philip Concannon for the BFI, James Maitre for Directors Notes, Ben Flanagan for MUBI, and The Fan Carpet.