The Criterion Collection, a continuing series of important classic and contemporary films presents You Can Succeed, Too.

Sing, dance, and get ahead with You Can Succeed, Too, the closest Japanese cinema ever came to a full-blown Broadway-style musical! Set in a tourism company looking to secure a big American client in the run up to the 1964 Tokyo Olympics, an ambitious salesman (jazz drummer and comedian Frankine Sakai) and his handsome, undemanding colleague (musician and actor Tadao Takashima) struggle to negotiate love and business amid the pressures of a booming Japanese economy and the American-style changes brought to their department by the president’s daughter (Izumi Yukimura). Featuring music from avant-garde composer Toshiro Mayuzumi and lyrics by renowned poet and translator Shuntaro Tanikawa, director Eizo Sugawa creates a musical comedy in the spirit of Frank Tashlin’s Will Success Spoil Rock Hunter? and Frank Loesser’s How to Succeed in Business Without Really Trying, celebrating and skewering Japan’s growing global profile with singing salarymen and dancing office workers.

Discussions of genre in the global context tend toward considerations of how genres are differently represented between nations and industries. Less discussed is how genre itself differs around the world. Consider, for example, the musical, an established genre form in English language cinema and in India but much less of one in Japan. This is not due to a lack of musical traditions in Japan, where Noh and Kabuki theatre thrived along with Asakusa operas, musical stage and theatre revues, and American jazz, Western classical music, and various hybridized forms. Musical traditions are longstanding in the cinema as well. “Song films,” like Matsumoto Eiichi’s 1924 hit The Caged Bird, featured narrating benshi or an accompanying singer perform hallmark songs during screenings, later leading to “popular song films” which saw established genres like melodramas, geisha films, and gangster pictures (like Seijun Suzuki’s Tokyo Drifter (1966)) exploit hit tunes and it eventually became standard practice for Japanese movie stars to release albums alongside their latest picture for cross-promotion. It was Toho that became Japan’s main studio for “films that sing,” an approach that inserted “musical moments” into Japanese films (often genre movies) without creating a musical genre unto itself.

Eizo Sugawa’s You Can Succeed, Too (1964) is the closest Japan ever came to the prototypical Western musical, combining familiar Japanese genres like the salaryman comedy and the industrial competition film and punctuating its capitalist critique with fully integrated musical numbers. The film concerns Towa Tours, a tourism company looking to maintain its commercial dominance over rival Kyokuto Tours in the run up to the 1964 Tokyo Olympics, and a pair of its salesmen, corporate fireplug Yamakawa (Frankie Sakai) and idle but good-hearted dreamer Nakai (Tadao Takashima). The tour division is thrown into upheaval when the president’s daughter, Yoko (Izumi Yukimura), is put in charge of the department and aims to implement American business practices in hopes of landing a big foreign client, World Express. Her officiousness runs in contrast to Nakai’s perceived indolence, however she is charmed by his sincerity and goodwill. Their potential romance becomes complicated by Nakai’s obligation to cover for the president’s dalliance with a gold-digging hostess named Beniko (Bond-girl Mei Hama), leading Yamakawa to put friendship ahead of careerism in an effort to resolve the confusion and let opposites once again attract. (For his part, Yamakawa resists a romance with Yo-Chan, a waitress who longs to return to the country and her small hometown.) 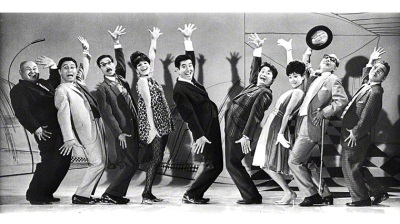 You Can Succeed, Too is flush with connections to American music. Frankie Sakai was an accomplished jazz drummer who played at American Army camps during the Occupation, often incorporating comic routines into his performances.  Tadao Takashima also played jazz music and achieved popularity as an actor for his ability to sing, playing Professor Henry Higgins in a 1963 Japanese production of My Fair Lady. The film’s music was composed by avant-garde composer and jazzman Toshiro Mayuzumi while its lyrics were written by Shuntaro Tanikawa, a renowned poet also known for his Japanese translations of Charles Schulz’s Peanuts, the nursery rhymes of Mother Goose, and Leo Lionni’s Swimmy. Most notably, director Eizo Sugawa studied musicals in the United States in 1964 in preparation for You Can Succeed, Too. The film is most frequently compared to the popular 1961 stage musical How to Succeed in Business Without Really Trying and Frank Tashlin’s Will Success Spoil Rock Hunter? (1957), and it’s difficult to imagine Sugawa not being strongly influenced by Tashlin’s particular brand of musical comedy.

With You Can Succeed, Too often called the most Tashlinesque film not made by the director, it’s worth considering what epitomizes Tashlin’s work and how it finds expression in a Japanese film that sings. As Ethan de Seife observes, Tashlin’s work is remarkably under theorized, perhaps because of his exclusive focus on comedy, perhaps because of his early work in animation, or perhaps because of his collaborations with Jerry Lewis. While not typically considered a political artist, Tashlin did have consistent targets for his comedy – consumerism, sexual mores, and the foolishness of modern life – and he loaded his films with gags at their expense through vibrant colours, packed frames, ribald jokes, and breakneck pacing. Sugawa’s film replicates this approach, declaring its Tashlinesque pedigree with Yamakawa’s opening work-out routine where the sturdy salaryman barks at his alarm clock, sings through an outlandish calisthenic and weightlifting program, frolics at high-speed in his building’s hallway (in contrast to a dozing Nakai), and finally leaps into his comically checkered compact car for a new day of careerism. From Beniko’s pink love nest (with faulty bathroom plumbing to soak the spineless men who hide therein) to the excessive exuberance of an ever-growing collection of drunk salarymen singing and stumbling their way through bars, noodle stands, and deserted city streets, You Can Succeed, Too is stuffed with Tashlin’s “gags on gags” form and steeped in his ambivalent celebration/satire of modern living, always finding ways to love what it mistrusts and never letting a good (or passable) joke get wasted.

Aside from its musical numbers, You Can Succeed, Too reflects the American musical by its organization around various oppositions – tradition/modernity, old/new, rural/urban, masculine/feminine. Many of the tensions are interpolated through the dyad of Japan and America. Mass protests against the Anpo renewal (the mutual security treaty between the USA and Japan) typified a politically and socially fraught Japan just four years earlier, yet the nation decidedly found itself later embracing the international spotlight through the 1964 Summer Olympics in Tokyo. You Can Succeed, Too works through the identity crisis of Japanese tradition besieged by American-style globalization through a pair of recurring songs. On the one hand, Yoko sings “In America,” celebrating a modern nation where “work is work and play is play,” where “yes is yes and no is no,” and where “I am I and you are you.” Yoko implies in the process that Japan lacks such clear and compartmentalized efficiencies, and so it is only natural that she should be both concerned with and attracted to Nakai, whose lack of enthusiasm with her progressive thinking marks him as out-moded, lazy, and naive. Nakai, for his part, sings “A Dream Desert” however the song does not confirm Japanese traditions but instead points the way to an alternative between the film’s oppositions. The salaryman longs for Taklamakan, a Chinese desert along the Silk Road which connected East to West. When the pair yield to their attraction for each other, it is Yoko’s “In America” that gives way to Nakai’s “A Dream Desert,” and when the film finally resolves itself into the coupling of Yoko with Nakai and Yamakawa with Yo-Chan, their respective songs converge with the exception of Yoko’s “In America.”

The final couplings of You Can Succeed, Too take place on the build site of a golf course but quickly transitions to an obvious stage set, resolving the film with a particularly Tashlinesque preoccupation with the reflexive use of artifice. Michael Raine notes that an American military base stood in for the work site however the production was kicked out after only obtaining a few shots. For Raine, the transition to an obvious stage set underlines Sugawa’s principle theme – that it is impossible for Japan to ever fully emulate America. Aaron Gerow supports such an interpretation by noting that Nakai describes Taklamakan as a “desert not yet seen” and a “hometown of my heart.” Nakai promotes a resolution in a place that is not Japan or the USA. It is, in fact, not even a place he’s ever been to and may never actually visit, a literal utopia in the sense that it is “no-place.” The happy ending of You Can Succeed, Too is achieved not in old values or foreign ideas but ultimately in reinvention at the personal, professional, and national levels. Success, much like genre, comes to be defined as something unique from dominating Western ideologies and reflects something more dynamically tantalizing in the alternative. The musical form does dominate You Can Succeed, Too, much as the go-go allure of American corporate capitalism weighs heavily over the film’s characters and the nation at large, yet it is grounded in familiar Japanese genres and themes – Toho’s salaryman comedies like the “Company President” series, industrial competition films like Yasuzo Masumura’s Giants and Toys (1958) and Daiei’s “Black” series, capitalist critiques like Masaki Kobayashi’s I Will Buy You (1956) – and it is in the interplay of these domestic vernaculars that Sugawa finds novelty, insight, and possibility. Plus, it’s adorably and ostentatiously hilarious.

MMC! is told by Michael Raine that his “Japan Sings! The Japanese Musical Film” program has been offered to the Criterion Collection (with free subtitling by him) but no interest has been found. That’s a true shame, as Eizo Sugawa’s film is a lovable, entertaining, and theoretically significant work that has charmed attendees to the “Japan Sings!” program (as well as film scholar Miriam Hansen). You Can Succeed, Too would certainly work its magic on Criterion fans as well and the film deserves to be better known outside of its domestic market. That image of the movie’s stars suspended in mid-air needs to be on a cover treatment, although MMC! proposes having a bit more fun with the title and describing it alongside a wacky “C” as ¥ou Can $ucceed, Too.

Credits: This proposal owes huge thanks to Michael Raine’s writing on You Can Succeed, Too for his film program “Japan Sings! The Japanese Musical Film,” as well as Aaron Gerow’s essay on the Japanese Musical in Corey K. Creekmur and Linda Y. Mokdad’s The International Film Musical. This proposal also drew upon Michael Raine’s “Modernization Without Modernity: Masumura Yasuzō’s Giant and Toys (1958)” from Alastair Phillips and Julian Stringer’s Japanese Cinema: Texts and Contexts and Ethan de Seife’s profile of Frank Tashlin for Senses of Cinema.

This imagined Criterion edition’s cover summary is adapted from the “Japan Sings!” synopsis and the Toho DVD/Blu-ray’s back cover summary. Commentaries and interviews are ported over from Toho’s existing DVD/Blu-ray release.