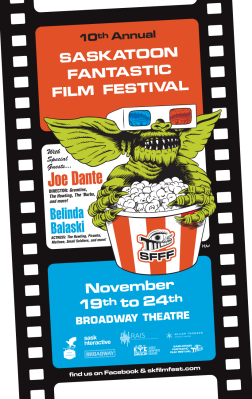 The final day of the Saskatoon Fantastic Film Festival opened with Matthew Rankin’s The Twentieth Century (2019), a fictionalized portrait of Canada’s weirdest, longest-serving, and middlest-of-the-road Prime Minister, William Lyon Mackenzie King. The film side-steps Mackenzie King’s secret spiritualism and instead creates a broader, stranger fantasy of Canada at the dawn of a new era. Rankin’s prerecorded introduction for the film described it as “nightmarishly Canadian” and his words were apt. The Twentieth Century is an Eraserhead/Isle of Dogs-esque imagining of Canadian history and culture, one obsessed with maple walnut ice cream, the scent of fresh timber, passive-aggressive manners, Indian leg wrestling, and medicinal “puffin cream.” Inspiration was taken from the Prime Minister to-be’s personal diary and Rankin connected with Mackenzie King’s tendencies toward vanity, repression, self-righteousness, and self-pity. Played by Dan Beirne with petulant primness, Mackenzie King struggles to achieve his maternally prophesied political and romantic aims (and sublimate his dominating shoe fetish), and the film traces his misadventures through the brutalist interiors of Rideau Hall, the frozen utopia of Quebec, a sunny and freshly logged, new age Vancouver, and a baseless and fetid Winnipeg. 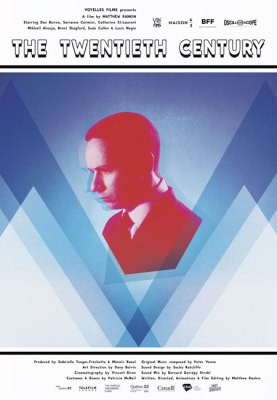 A former Winnipegger himself, Rankin carries on the prairie post-modernism of Guy Maddin and John Paizs, and like his predecessors, Rankin finds ways to make a hard earned dime look like an eccentrically spent dollar (or loonie). Hand-painted and animated in sections by Rankin himself and utilizing a palette that evokes the colours of Canadian banknotes, The Twentieth Century’s stunning production design recalls earlier film eras with its intertitle chapter cards while it also embraces the fresh Canadianness established in the aesthetics of Group of Seven painters like Lawren Harris and York Wilson and the modernist designs of Expo ’67. Rankin even loads his historical subject with a gleeful perversity and a shameless phallocentricism that would do Ken Russell proud – watch out for that ejaculating cactus and that narwhal horn! The Twentieth Century is an acid trip-take on peace, order, and good government and it is staunchly glorious.

Oscilloscope Laboratories has picked up the rights to Rankin’s brilliant film and we can only hope that its eventual hard media release will not only include The Twentieth Century but also many (if not all) of Rankin’s short films including Negativipeg (2010), the most Winnipeg-ish thing I’ve ever seen committed to film. 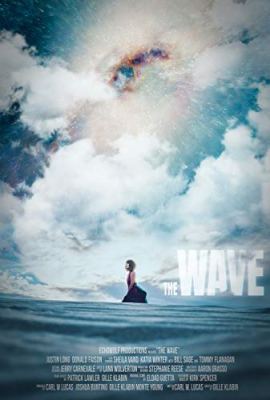 Naturally, some dreamscapes paled in comparison to Rankin’s feverish journey into Canadian dutifulness and repression. Alvaro Rodriguez Areny’s Andorran short The Blizzard (2019) offers a Möbius strip take on French World War II refugees struggling through a very mild snow storm and threatening border crossings. Arney’s short looks wonderful but its diminishing repetition hinted at a depth that wasn’t there. Unfortunately, Arney’s short anticipated the slightness of Gille Klabin’s The Wave (2019), a faux philosophical, wannabe head trip. Justin Long stars as Frank, an ascending corporate attorney thanks to his discovery of a potential misrepresentation on an insurance application that will avoid a massive payout. He celebrates with a night of partying that ends with a drug-induced black-out, leaving him without his wallet and missing his female confederate. The Wave has funny moments as Frank’s lingering high continues to subject him to black-outs and hallucinations during his subsequent investigation into the previous night’s festivities, however the film struggles to remain coherent as Frank begins to time-travel and the movie’s “look for the signs,” “the universe is speaking to you” plot is tired and lacks any meaningful insight. In a year where the SFFF leaned so heavily into bizarre cinema, The Wave looked juvenile alongside In Fabric, Greener Grass, Jesus Shows You the Way to the Highway, and even Butt Boy. 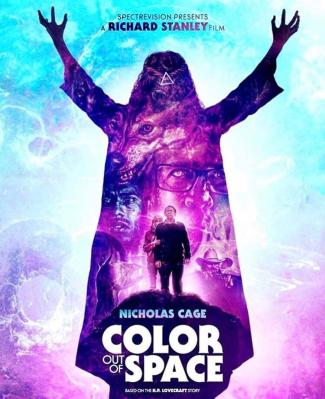 It seems like any discussion of Richard Stanley’s Color Out of Space (2019) requires that the reviewer check their Lovecraftian bona fides. I love my H.P. Lovecraft stories, having gorged myself on them when I was 18 or 19 years old, and so I’m disappointed to say that Stanley’s film left me wanting. That’s not to say that my relationship with the source material is any more authoritative than that of Richard Stanley. Rather, it is merely a recognition that the director’s execution of Lovecraft’s story was not for me. Stanley brings Lovecraft’s tale into the present, having a mysterious meteorite crash into the farm of the Gardner family and bringing madness and mutations with its shimmering magenta energy. The film is visually impressive thanks to eye-popping colours and squelching, misshapen body horror, but its story feels rushed to the point that narrative beats feels altogether missing. Worst of all is the conspicuously distracting presence of Nicolas Cage which weighs down the film with an absurd-sounding voice that makes various appearances and a ridiculous obsession with alpacas. Given that it was Cage’s involvement that got Stanley’s passion project made at all, it is doubly regrettable that the film and the performance are not better. 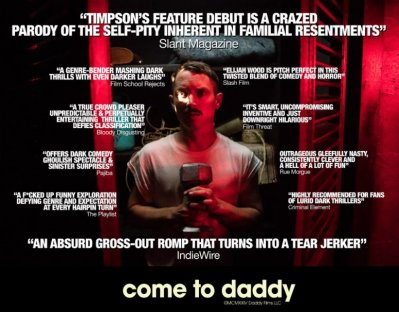 Ant Timpson’s Come to Daddy (2019) is an enjoyable but difficult film to discuss. Initially, the movie concerns a sheltered, hesitant man-child named Norval Greenwood (Elijah Wood) who receives an invitation in the mail from his estranged father (Stephen McHattie) and attends his remote coastal cabin. Despite his 30-year absence, Norval’s father is far from welcoming and seems more than happy to run down and humiliate his long lost son. Fate and history intervene on this tense reunion and spoilers quickly pile up as Come to Daddy proceeds, preventing any detailed discussion of the film overall. Timpson’s movie entertains, becoming increasingly outlandish and gory as it clips along, but those early moments between Wood and McHattie stand out, turning that cabin into a mean-spirited pressure cooker. For all of Come to Daddy’s unhinged glory, and there’s plenty, it never surpasses those early scenes of paternal discontent.

The SFFF concluded with two great shorts. Gaspar Palacio’s H.B. (2017) is one-minute/one-joke perfection, involving a family’s escape to a homemade shelter and a father’s lingering grudge. Oskar Lehemaa’s Bad Hair (2019) finds a balding man trying a mysterious and foreign hair growth tonic and experiencing a series of grotesque metamorphoses. I must admit to shielding my eyes on more than one occasion during Bad Hair, such is the quality of its body horror, and to still watching it anyways, such is the short’s morbid humour.

The Saskatoon Fantastic Film Festival offered an exceptionally fascinating program tailor-made for MMC! tastes. Horror-comedies, quirky rock-docs, and bonkers surrealism put the 2019 edition on par with the best years of the Festival and equal with the wonderful 2016 program. I’m told that the 2020 program is unlikely to include another banner guest on par with Joe Dante and Belinda Balaski but there’s more than eleven months for John Allison and his team to plan, so maybe new surprises might be in store. Thanks again, John, and see you next year!