Short films led the charge on the Saskatoon Fantastic Film Festival’s third day with an eight film block of female focused shorts and another two short films that could have probably fit into the same section. Readers of last year’s coverage might recall my frustration with shorts that offer little more than spooky premises or creepy contexts, however you’ll find few such complaints amongst Day 3’s titles. Yfke van Berckelaer’s Lili (2019), an MMC! favourite at this year’s Buried Alive Film Festival, was screened, as did the Chattanooga Film Festival short, Sydney Clara Brafman’s gory and brief The Only Thing I Love More Than You is Ranch Dressing (2018). Adele Vuko’s The Hitchhiker (2018) was an entertaining blend of female road trip goodwill, real world violence, and well-timed supernatural intervention and was probably the easiest short to enjoy on Day 3. Valerie Barnhart’s Girl in the Hallway (2019) offered a true crime tragedy that powerfully wrestled with guilt, grief, and inaction through pained and worn stop-motion animation. Daniel DelPurgatorio returned to the SFFF with In Sound, We Live Forever (2019), a beautiful short in the agrarian horror mode that finds two young lovers beset by a monstrous killer in the rural American heartland. The short looks gorgeous, contrasting the serenity of its pastoral present against the intimacy and then terror of its past tense soundtrack, and it elegantly pivots into the full present tense to depict a desperate escape and a grim conclusion that posits the monstrous violence of the genre but also a kind of existential smallness that makes its horror seem almost meaningless.

Three shorts nearly ran aground of my objection to mere premises, however each were so wonderfully rendered that any misgivings were effectively neutralized. Guillermo de la Rosa’s A Noise That Carries (2019) concerns a man fearful that someone has broken into his house and who receives help from an unusual female neighbour. The short portrays its horror oddly, offering a threat that is both fearsome and rather ridiculous at the same time, however it all works together to create something that is deceptively simple and all the more memorable as a result. Faye Jackson also returned to the SFFF with Changeling (2019), an eerie short that seems to present an inversion of the changeling myth. The meaning of Jackson’s transformation/replacement is not easy to discern, but its sickly green palette, its urban fantasy hallmarks, and its in-camera effects are remarkably affecting. I’d be hard pressed to explain the conclusion of Erica Scoggins’ The Boogeywoman (2019) and that is a detriment to the short, however its uneasy depiction of teenage life and its evocative, dimly lit locations make this story a girl’s first period a wonder to behold. 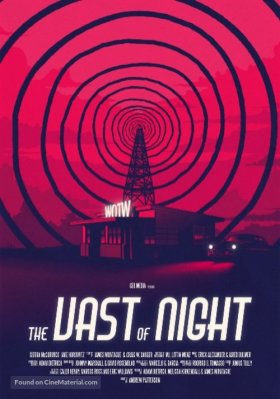 Lonely, dimly lit streets also take centre stage in Andrew Patterson’s stunning The Vast of Night (2019), a slow burn sci-fi story set in the 1950s about two intrepid youngsters, a radio DJ and a 16-year old switchboard operator, trying to identify a strange sound circulating on phone lines and across radio waves. The pair, ably played by Jake Horowitz and Sierra McCormick, walk, run, and race through the empty streets of their New Mexico town while the rest of its citizenry attend a basketball game at the local high school. Patterson’s camerawork is quietly overdetermined, preferring long takes, long shots, and extended tracking moves from low vantage points, emphasizing the glow of neon, sodium, and metal halide lamps and making his subject small against the vast night sky that hangs and spreads above. Indoors, Horowitz maintains his long takes but lingers in close-up, drawing power from his performers and bringing authority to their hushed and secretive words. There are points where Patterson’s film threatens meta-self-awareness, but The Vast of Night doesn’t waver from the sincerity of its story and plays it straight throughout. The result is a methodical, atmospheric, and suspenseful film deserving of its awards at Slamdance and The Overlook Film Festival and its acquisition by Amazon. Look for it next year!

Tyler Cornack’s Butt Boy (2019) is surely set to become a guilty pleasure for many people. While essentially cat-and-mouse crime thriller between a criminal and cop, Butt Boy‘s cat is the anus of Chip (Cornack), a weary family man who develops a remorseless compulsion to place items of ever-increasing size up his butt, while the film’s mouse is Police Detective Russel Fox (Tyler Rice), a dogged cop struggling with sobriety and who happens to have Chip as his AA sponsor. Russel has his suspicions of Chip and is precisely the type of mouse that enjoys poking his nose out of the kettle. Butt Boy should not work as a 100-minute feature film (especially when it’s all played straight), but it does. Chip is suitably pathetic and detestable, while Russel has a kind of scruffy charm thanks to a performance that resembles some kind of Baldwin brother impersonation of a middle-aged, tough guy Robert de Niro. I’ll stop here, lest this discussion stray into spoilers and Richard Gere jokes. Butt Boy is a sneaky fun title for those with an open mind about openings.

With three more stacked days with the Saskatoon Fantastic Film Festival and no time to provide further updates, MMC! will return next week with reports on Richard Stanley’s The Color Out of Space, Ant Timpson’s Come to Daddy, Matthew Rankin’s The Twentieth Century, Lijo Jose Pellissery’s Jallikattu, Miguel Llansó’s Jesus Shows You the Way to the Highway, and more!