On the margins of Tokyo, a band of petty thieves take in an abandoned and abused child stranded in the cold. Incorporating the girl into their family, they find new happiness amongst each other, however their tenuous, below-the-radar existence is threatened when their son is arrested and their makeshift family is questioned. Shoplifters is Hirokazu Kore-eda’s latest masterpiece, winner of the Cannes Film Festival’s Palme d’Or and a quintessential expression of filmmaker’s love for  marginalized lives, complex families, and domestic dramas.

I am always fascinated by the implications made and lost in the translation of foreign film titles. Hirokazu Kore-eda’s Manbiki Kazoku literally translates as Shoplifting Family but has been released under the pithier, English language title of Shoplifters. It’s a sensible choice but one that loses a bit of intricacy in the process as Shoplifting Family offers the double meaning of “a family that steals” and “stealing a family,” competing ideas that have equal relevance to this Palme d’Or winner. This winding of these two ideas is critical to Shoplifters‘ gracious power, making it a humanist classic that Kore-eda calls his most socially conscious work to date.

Shoplifters concerns a small, multigenerational family living closely in a ramshackle home tucked away in a secluded corner of Tokyo. Osamu (Lily Franky) works as a day labourer on construction sites until he injures his ankle. His wife Nobuyo (Sakura Ando) works in an industrial laundry, picking the pockets of clothing for forgotten items. Her sister Aki (Mayu Matsuoka) works at a hostess club/peep show, masturbating in front of a one-way mirror and cuddling with clients, while elderly grandmother Hatsue (Kirin Kiki in her final role) helps to support the family with her cluttered home and her dead husband’s pension. Osamu and Shota (Jyo Kairi), a young boy who seems to be Nobuyo’s son but refuses to call Osamu “dad,” routinely shoplift food and household items using a system of hand signals. Returning home one cold night, they discover a small girl abandoned on an apartment balcony and decide to bring her home with them. When Hatsue discovers signs of abuse and neglect on the girl (named Yuri and played by Miyu Sasaki), they decide to keep her; and when they observe her disappearance reported on the news some weeks later, they mutually decide to cut her hair, re-name her Lin, and make her a permanent part of their family. The new group finds added happiness in their meagre lifestyle but Shota’s arrest while fleeing from a theft upends their existence, exposing deceptions that are both expected and unexpected and that test the easily understood definition of family.

Kore-eda, who acted as writer, director, and editor on Shoplifters, took his inspiration from the Japanese Recession and from stories of people collecting the pensions of dead relatives to make ends meet. Inspiration was also taken from a specific interaction with a small girl. Kore-eda remarks:

When I visited an orphanage (for research), a little girl took the (Leo Lionni) picture book “Swimmy” out of her backpack and suddenly started to read it. The staff tried to stop her, telling her she was bothering us, but she read it to the end. Everyone, including the staff, was moved and applauded her. She looked happy. I thought she really wanted to read the book to her parents. I couldn’t get her out of my head and wrote a scene reflecting that moment. … When I was working in TV, a sendai (senior) told me that I should make my program for one person, be it my mother or a friend or anyone. … I made this film for the little girl I’d heard reading “Swimmy.”

The idea of a film that attends to “a family connected only by crime” resonated with Kore-eda. Shoplifters‘ set-up is “a family that had come together not out of kindness, but for the purpose of money,” yet the film nevertheless demonstrates great compassion between its characters and in ways particular to his films. Still eschewing didactic exposition and grand gestures, Kore-eda once again reveals the feelings and histories of his characters through everyday routines and interactions. Some are the typical and mundane variety usual to his work, often relating to food (croquettes, gluten cake) or recreation (building a snowman, visiting the beach). Others are unusual and unique to Shoplifters, such as the coded hand gestures that Osamu and Shota exchange during their criminal grocery store visits. For as unusual and illicit as their lifestyle is at times, Kore-eda binds the representation of this family in the routinized behaviour and social structures of typical families, allowing for his usual reflective tone and his evocations of shared experience to find traction in this odd reflection of a domestic life. Shoplifters is quintessential Kore-eda – gracefully lyrical and full of small acts of affection.

Approximately three-quarters of the way through Shoplifters, Kore-eda turns Yuri/Lin’s kidnapping and the family’s enterprises into issues of police and media concern, then drops the bottom out of the film’s narrative as a result, tragically bringing into question every assumption and understanding we have about Osamu and his kindhearted clan. Peter Bradshaw calls it “the most extraordinary surprise ending, a twist-reveal worthy of psychological suspense noir. Yet the film is nothing like that generically.” Just prior to Shoplifters, Kore-eda unexpectedly explored the courtroom genre with the heady legal psychodrama The Third Murder (2017), wherein a defence attorney struggles to understand his client or to believe his account of a crime that might result in a death penalty. That film has a dour and cold feel in keeping with its slate grey palette, devoid of the warmth and familiarity of Kore-eda’s usual family dramas. Still, both The Third Murder and Shoplifters share a central tension between public and private, exploring the gap between totalizing legal rationalism on the one hand and personal, emotional experience on the other, between uncompromising social norms and messy real-world experiences. Shoplifters limits its scenes of institutional austerity and puts a genial and compassionate face on The Third Murder‘s attention to subjective truths. Here, the intervention of legal authority arrives late and its paradigm shifting power complicates our well-established assessments of this family’s characters. Osamu and Nobuyo’s dishonesties seem rightly condemned in some cases while their positive actions seem unfairly paved over in others. Shoplifters is far more ambivalent than the typical legal drama and reveals Kore-eda as far more effective in interrogating that disjuncture through his preferred family drama.

By pitting the unsanctioned custodial care of Yuri/Lin by this family of thieves and grifters against the impersonally conventional definitions of police and protective services, Kore-eda engages in a form of socio-economic critique. Shoplifters deservedly draws comparison to Oliver Twist and Kore-eda to British docudramatist Ken Loach. The film tests the authority of our formal social systems against the needs and solutions of challenged individuals. Osamu and Nobuyo offer rationalizations for their actions in the film: it’s not stealing because the goods don’t belong to anyone until they’re sold; it’s not kidnapping if no ransom is demanded and the girl isn’t confined. These excuses are hardly convincing, but the generosity and kindness that accompany them creates an air of excusability to their respective thefts. More importantly, by addressing issues of love and commerce through the same frame of stealing, Kore-eda binds together deeper critiques over family and consumerism and make them the foundation of his film. Is it permissible to steal food to feed your hungry family? Is it allowable to steal a child hungry for care and safety? Is it permissible to make a habit of either? Is capitalism justifiable when a family can live for a month on the proceeds of a handful of stolen fishing rods? Are biological bonds valuable when they deny the love and affection of others once blood relations fail? Shoplifters offers a compassionate examination of how society’s easily understood narratives become dominating, how those at its margins are often left unheard and denied, and how legal authority can mistake justice for legality. Still, Kore-eda, Japan’s great humanist, can’t help but believe in the grace and possibilities of good people, be it in the blind eye of a generous and tolerant shop-owner, the enduring commitment of a couple separated from each other, or the love of a boy for his father, whomever he may be. 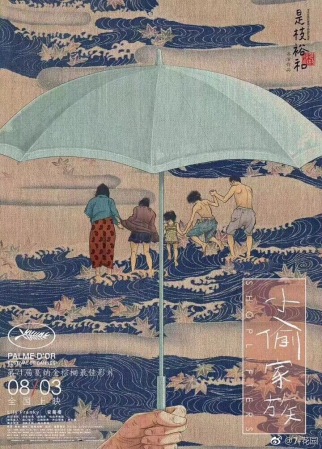 There’s little need to justify having more Hirokazu Kore-eda or another Palme d’Or winner in the Criterion Collection, but let’s just point out what an improvement it would make over Magnolia’s DVD release of the film, a disc with an endless number of trailers for other films and nothing in support of Shoplifters whatsoever. MMC! loves this Japanese poster for the film, an illustration that looks tailor-made for a light blue wacky “C”in the top left corner and pair of boxes on its bottom left edge. Let’s make this happen and let Shoplifters steal a few more hearts.

Credits: With translations of the special features on the Japanese deluxe Blu-ray of Shoplifters being difficult to make out, we’ve included a making-of documentary that seems to be included on that release and have made the rest up. We’ve chosen Imogen Sara Smith to provide an essay based on her article “Loving Memory: After Life and Shoplifters” for Film Comment. We’ve tapped Mitsuyo Wada-Marciano to also provide an essay as we did for our imagined release of Our Little Sister. You may recall that she was selected for her interviews with Kore-eda and her frequent writing on him, including her essay “A Dialogue Through Memories: ‘Still Walking’” and her book Japanese Cinema in the Digital Age.

This posts owes thanks to reviews by Peter Bradshaw for The Guardian, David Ehrlich for IndieWire, Brian Tallerico for RogerEbert.com, Mike D’Angelo for The AV Club, Manuela Lazic for The Ringer, and Aliza Ma for Film Comment. Big thanks are also owed to Daisuke Beppu for sharing his carefully rendered thoughts on Shoplifters. Daisuke is part of The 25th Frame network and can be seen regularly on his YouTube channel.

One thought on “Shoplifters (Hirokazu Kore-eda, 2018)”