A STYLISH AND DEMONIC DEBUT

On a dark and stormy night in an unnamed German city, a young taxi driver named Luz (Luana Velis) arrives at a police station in a state of shock. Meanwhile, at a nearby bar, the mysterious psychiatrist Dr. Rossini (Jan Bluthardt) is approached by Nora (Julia Riedler), a woman with a disconcerting manner and an unexpected connection to Luz. They strike up a conversation over drinks and before it’s too late, Rossini falls into the thrall of a malevolent force intent on finding Luz. When Dr. Rossini arrives at the station to hypnotize Luz and assist in taking her statement, a claustrophobic journey into anxiety-inducing horror reaches a terrible crossroads.

Shot on 16mm with impeccable visuals, Tilman Singer’s audacious art school thesis project is an unexpected horror revelation. An experimental shocker with an irresistible retro vibe, this first feature fluidly assembles elements from the horror and art house cinema of the 1970s and ’80s, deftly deconstructing the demonic possession narrative and turning a simple police station into an intersection for the occult.

The plot of Luz summarizes deceptively easily. The film opens with a long shot/long take of Luz (Luana Velis), a young female cab driver who wanders into an idle police station late one night. Having recently been in an accident and missing her passenger, she’s questioned by Detective Bertillon (Nadja Stübiger) and translator/sound technician Olarte (Johannes Benecke) but responds only with a profane version of the Lord’s Prayer recited in Spanish. At the same time, a psychiatrist named Dr. Rossini (Jan Bluthardt) waits in a bar and meets Nora (Julia Reidler), an unusually intense woman and Luz’s passenger from the accident. Nora, in fact, has a longer history with Luz than their car ride together and her discussion with Dr. Rossini is no mere happenstance. Their secretive meeting in the bar’s washroom is not the quick tryst he expects and he is instead put in contact with something otherworldly and intent on reuniting with Luz.

Dr. Rossini is called to the police station where he hypnotizes Luz and has her re-live her cab ride with Nora through a simplified approximation of the vehicle using banquet chairs, a rearview mirror, and a set of lights. Things go well enough until all hell breaks loose – demonic possessions occur, infernal rites at Luz and Nora’s Chilean Catholic girls school are revealed, some light cross-dressing and nudity happens, and the spectre of malevolence takes hold of the entire proceeding. Unusual as its story is, Singer’s horror-thriller is made all the more strange by its Kiyoshi Kurosawa-like ambiguity and dreaminess and its almost Brechtian staginess and minimalism. His film exhibits an experimentalism and an intelligence that brings to mind Andrei Tarkovsky, Alejandro Jodorowsky, and Andrzej Zulawski. Singer’s aim with Luz was to put his audience into a type of hypnosis of their own, using a lack of exterior shots and transitional scenes to induce a feeling of claustrophobia and a bare, stripped-down production design to create a sense of disquiet.

Part of Singer’s success in achieving Luz‘s level of uncanny dread is owed to the film’s particular texture, something that feels uncommonly dislocated in time and place. Seeing Luz for the first time, it’s natural to question it as a film from 2018. Its 16mm film stock is not merely conspicuous as an under-utilized medium with a grain rarely observed in contemporary cinema; it’s full of flecks and flaws that suggests an older and already screened film. Its spare, utilitarian locations, synth-heavy score, and a costume and set design that ranges between 1985 and 1995 (reel-to-reel recorders, backward hats, fanny packs, fluorescent and neon lights, white leather jackets) are both utterly convincing as a product of a previous era and oddly dissonant as being unsettled in its specific moment. Singer cleverly leverages this disconnected atmosphere by mixing Dr. Rossini’s interrogation with Luz’s memory of the cab ride, placing Nora within the police station space and creating a sound design that moves uneasily between the two times and spaces (Bertillon’s walkie-talkie mixing with the cab’s radio broadcast). By the time the film descends into its chaotic finale, where Rossini’s possession takes full force and the questioning becomes a turmoil of fog and light, Luz‘s uncertain context is revealed to be a trapdoor into complete pandemonium and where the demonic force that motivates the film assumes complete authority. 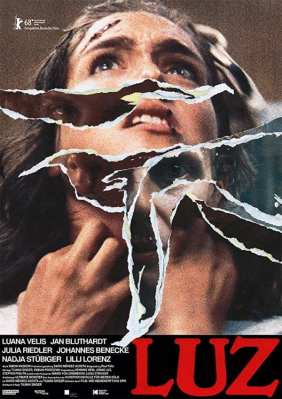 Luz was the result of extensive research by Singer into the work of police sketch artists, then interrogation techniques, and finally into hypnotism. Interested in the problem of how open a hypnotized subject can be to the power of suggestion, Singer seized upon the idea of manipulating an entranced individual and saw it as “a great tool for an evil force in the movie.” The result is something far more slippery and elusive than the usual horror film, full of unreliable subjectivity and chilling atmosphere. MMC! would love to see an Arrow Video edition of Luz, a label that is equally comfortable with artful frights as it is with chopped-up campers. Singer’s short films don’t suggest any particular affinity for the horror genre, but it’s always good to support an emerging talent and Tilman Singer is obviously a filmmaker to watch out for.

Credits: With no hard media release yet announced and no previous films to crib from, we’re imagining this edition from the ground up. Luz began with Singer’s intention to continue working with his regular crew and so this speculative release emphasizes that community of talent. The cover summary is derived from summaries prepared for the Fantasia Film Festival, Ithaca Fantastik, and the Berlin International Film Festival.

This post owes thanks to Tilman Singer’s own website, interviews of Singer by Sarah Foulkes for /Film, Heather Wilson for Daily Dead, and Shannon McGrew for Nightmarish Conjurings, and reviews by Dennis Harvey for Variety, Matt Donato for /Film, John DeFore for The Hollywood Reporter, Anton Bitel for Little White Lies, Rebecca Pahle for Film Journal International, Andrew Todd for Birth. Movies. Death., and Michael Gingold for Rue Morgue.

This is MMC!‘s final post in support of the 2018 Ithaca Fantastik (but not our final post for 2018!). Big thanks once again to the good folks at IF!!!