In the neon glow of 1979 Paris, Anne (Vanessa Paradis) makes her living producing low-budget gay pornography and struggles with the heartbreaking rejection of her longtime lover and current film editor Loïs (Kate Moran). She aims to inspire Loïs back into loving her with increasingly ambitious productions, even using the murders of her actors by a leather clad killer as inspiration, but as the killings continue and her troupe becomes increasingly cautious, Anne assumes the role of amateur sleuth investigating the secret of the mysterious figure that stalks her company. Deftly blending Parisian porn silliness and Italian slasher conventions with a pulsing score by electronic music group M83 and a perfect period production design, Knife + Heart is an affectionately queer tribute to cinema’s body genres and to love in its many forms.

Spend enough time with the Criterion Collection and you’ll eventually come across questions about whether the label will release a certain type of genre cinema missing from its library. Gialli was a semi-regular topic of discussion but with so many horror labels serving that market and putting out Criterion quality editions of these Italian slashers (particularly Arrow Video), a CC released giallo seems increasingly remote. More notoriously, questions often fly over whether Criterion would ever release a pornographic film, slipping into the porno chic era and stamping a wacky “C” on the likes of Behind the Green Door, The Devil in Miss Jones, or The Opening of Misty Beethoven. Never say never, but a hardcore Criterion title still seems like a reach. The more likely solution to this potential gap in curation rests in finding a contemporary film that explores this material without exactly being that material. Enter the surreal, genre-focused, queer-oriented, vintage-emulating perspective of French filmmaker Yann Gonzalez and his latest movie, Knife + Heart (Un couteau dans le coeur). An in-competition title at the most recent Cannes Film Festival, Gonzalez merges giallo tension and violence with LGBTQ+ utopianism, creating a queer-positive take on the slasher perfect for Criterion’s art house sensibility. 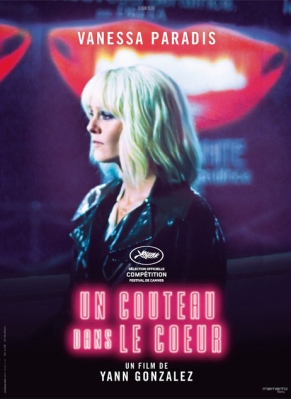 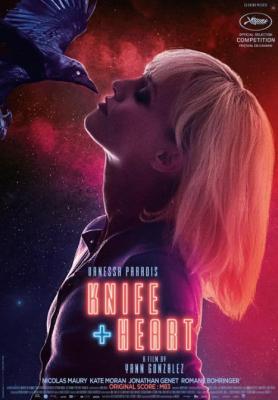 Knife + Heart operates largely as a riff on gialli cinema with its silent murderer stalking Far West’s actors and killing them with a bladed dildo, but Gonzalez’s tribute to these Italian slashers goes beyond leather masks and eccentric weapons. The film operates through a series of elaborate set pieces both real, with the killer murdering Anne’s actors in sex clubs, abandoned lots, and in pitch black hideaways, and fictional, through scenes performed in Anne’s films, on cabaret stages, or on nightclub dance floors. Gonzalez employs giallo’s heightened visual aesthetics through sheets of intensely coloured light and bold movements such as a forest-set murder described by the fleeting glimpses of a spinning camera. Anne assumes the role of lay detective and follows a trail of loose and improbable ends to eventually identify Knife + Heart‘s killer. Gonzalez’s film is often criticized as being uneven in tone, pacing, and, to some extent, plausibility, then knocked for being insufficiently funny and failing to parody the giallo form. The flaw in such critiques is that they apply equally to the gialli that inspired Gonzalez and undercuts the director’s fidelity to the genre and to the idea that such conventions appeal to its fans. Gonzalez has remarked, “I wanted to have fun with fantasy, horror or even Giallo codes, whilst remaining respectful of them of course. Above all, I didn’t want to try to be smarter than the genre but rather to embrace it and assume it.” More explicitly, Gonzalez also noted, “In giallo movies, there are lots of very stupid ideas, but they are so in your face.” A blind grackle, a deformed hand, or a lidless eye might be a needless affectation in another film but they are key components of Knife + Heart‘s appeal as a film in love with movies, with movie-making, and with cinematic possibility. 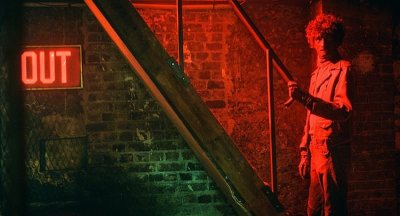 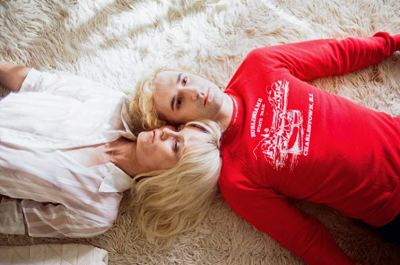 Knife + Heart offers a particularly utopian view on LGBTQ+ culture, one that seems to run in complimentary opposition to the often mean-spirited perversity of gialli sexuality. For the film’s director, it was a very conscious decision.

I think I just wanted to depict an ideal world, a world that would reverse-not the values-but the norm of our society. [We’re] in such a patriarchal, manly and heterosexual society, that bringing a cast of characters that are 98% queer (gay, lesbian, and transgender)-not to depict them as unpleasant characters, but as lovable characters-for me it was like an invitation to the audience. I didn’t want the homosexuality to be a subject. I didn’t want it to be something that was discussed in the film. It was there. And that’s all. That was the most important thing for me. And I think after a few minutes you forget that the film is only portraying queer people.

Part of Knife + Heart‘s strength as a queer film is that the forgetting of its homosexual content arrives through its embrace rather than its suppression. As Anthony Nocera observes, Gonzalez still populates his films with the “terrified twinks and terrifying gay men” already common to western cinema, but Knife + Heart re-codes them into a source of fun. Far West Films includes Jack of all trades Archibald (Nicolas Maury), gay-for-pay doppelgänger Nans (Khaled Alouach), Mexican macho man Luis (Noé Hernández), and a portly fluffer nicknamed “The Golden Mouth” (Pierre Pilol). As Nocera remarks, “The gay men get to cum, and sex and the anxiety surrounding it (and there is anxiety surrounding it) isn’t the source of the horror in Knife + Heart, with the violence in the film serving the human drama at the film’s centre.” 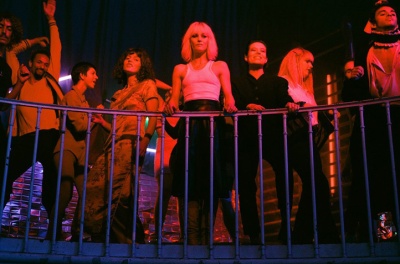 Gonzalez originally intended a different ending to his thriller but the 2016 Orlando nightclub shooting shocked him, struck and saddened him with the idea that the killer was a closeted homosexual, and the film was re-conceived to pursue a catharsis by having its victims turn against its monster and the internalized homophobia that motivates the killings. In doing so, Gonzalez preserves the peaceful, natural, and uninhibited core of Knife + Heart and offers an invitation for “straight audiences to be part of this territory, of this queer haven.” Set just a year before Paris’ first documented AIDS death, it would be easy to read the film’s killer as foreshadowing an upcoming epidemic, but Gonzalez’s film rejects this approach by having his queer community successfully resist the violence and hatred that threatens it. As the filmmaker states, “To me it was just picturing a lost island before AIDS came up.” 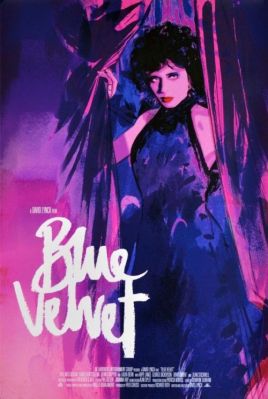 The film features a sneakily faithful production design that begins with director of photography Simon Beaufils’ immaculate lighting (K+H infamously spent a notable portion of its budget by merely switching the yellow/orange sodium street lights of contemporary Paris with the blue/green neon of the late ’70s and early ’80s), gorgeous 35mm cinematography (16mm for its flashback/nightmare sequences), and a throbbing analog synth score of M83 (led by Yann’s brother Anthony who reunited with his original bandmate Nicolas Fromangeu for the project) that recalls the work of Goblin and Giorgio Moroder, making Knife + Heart a fabulous sensory experience and an engrossing dive into all manner of genres and industries often difficult for the Criterion Collection to approach. This, coupled with the movie’s positive perspectives on LGBTQ+ culture and sex work (usually depicted as a miserable enterprise), make it an enticing title for a wacky “C.” Knife + Heart has been picked up for US distribution by Altered Innocence, but no home media plan has yet been revealed by the company. Perhaps some synergies might be created between AI and CC and a Criterion release of Gonzalez’s latest could happen. If so, MMC! proposes British illustrator Tula Lotay for a potential cover treatment. We like the idea of specifically matching a female artist with this title and Lotay’s sexy, dangerous, and colour-suffused poster for Blue Velvet (David Lynch, 1986) points in the direction of Knife + Heart.

Credits: With no hard media edition yet circulating and no special features to crib from, MMC! is building this imagined release from the ground up. The cover summary was adapted from various sources including the Altered Innocence synopsis. Anthony Nocera was chosen to provide a booklet essay because of his brief comparison of K+H to William Friedkin’s Cruising (1980) and out of a desire to see those ideas elaborated upon.

This post owes thanks to interviews with Yann Gonzales by Sugarpulp, Jordan Cronk for Film Comment, Monica Castillo for No Film School, Alistair Ryder for Film Inquiry, and José Sarmiento Hinojosa for Desistfilm, as well as Natalie Theodosi’s interview with Vanessa Paradis for WWD and reviews (both positive and negative) by Peter Debruge for Variety, A.A. Dowd and Katie Rife for The A.V. Club, Rory O’Connor for The Film Stage, Jordan Mintzer for The Hollywood Reporter, David Ehrlich of IndieWire, Martyn Conterio for Cinevue, Peter Bradshaw for The Guardian, Trace Thurman for Bloody Disgusting, Michael Higgs for The Upcoming, Manon Garrigues for Vogue Paris, Manuela Lazic for Little White Lies, Caroline A. Tsai for The Harvard Crimson, Ben Croll for The Wrap, Anya Stanley for Dread Central, Adam White for i-D, and Walter Chaw for Film Freak Central.

This post supports MMC!‘s coverage of the 2018 Ithaca Fantastik (as well as the Saskatoon Fantastic Film Festival where Knife + Heart proved to be my favourite film of the Fest). We’re more than a month out of IF 2018 and more reviews and imagined releases of IF films are still on the way, so thanks again, Ithaca!