Day 4 of the Saskatoon Fantastic Film Festival was loaded with screenings and bracketed by a pair of animated programs – the Saturday Morning All You Can Eat Cartoon Party and the web-series Crisis Jung (Baptiste Gaubert and Jérémie Hoarau, 2018). MMC! has already proclaimed the greatness of Crisis Jung and we’re loath to spoil Keir-La Janisse’s program of Saturday morning content given that it continues to tour festivals and cinematheques. Themes do tend to run through the Cartoon Party programs and “women’s lib” stood at the forefront with cartoon episodes on equal opportunity, commercials for the YWCA, and PSAs that addressed federal pay equity laws through iconic comic book figures. The Cartoon Party enjoyed a large audience that was quick to applaud for great content and progressive messages and to shout along with the enthusiastic narration of the cartoons. Expect to see another Cartoon and Cereal Party at SFFF 2019!

Once the kids were cleared out, the SFFF returned to usual programming with Brian Yuzna’s Society (1989), the second film in the Festival’s body horror retrospective. I must admit that Society was a much better paced film than I remembered it and I enjoyed it much on this viewing. The star of the film remains the “surrealist make-up” of Screaming Mad George, which looked amazing on the Broadway Theatre’s big screen in all its gloopy, gory glory. Yuzna’s twisted, leaking, dysmorphic attack on the vengefully affluent may be even more relevant today than it was in the ’80s, making it an unchallengeable body horror classic.

Shifting from Beverly Hills to outer space and from privileged haves to hardy have-nots, the SFFF screened Christopher Caldwell and Zeek Earl’s Prospect (2018), winner of SXSW’s Adam Yauch Hörnblowér Award which honours “a filmmaker whose work strives to be wholly its own, without regard for norms or desire to conform.” Based on Earl and Caldwell’s 14-minute short from 2013, Prospect concerns a teenage girl (Sophie Thatcher) who travels to a remote alien moon with her father to harvest a large deposit of gems in a toxic forest and is forced to survive by throwing in with an eloquent rogue (Pedro Pascal in a captivating performance). Space travels is rarely depicted in such an impoverished manner, full of jerry-rigged spacesuits, cheap plastic spacecraft, and wind-up blasters, and the movie wonderfully evokes the haggard frontier spirit associated with films like John Huston’s The Treasure of the Sierra Madre (1948). The film’s immersive world-building is further enhanced by its anachronous dialogue and its unexplained jargon, buttressing its characters’ uncertainty with the viewers’ own ignorance and enhancing its already earned tension. Prospect is first-class smart sci-fi and those looking for more from the filmmakers will take comfort in knowing that Caldwell and Earl have recently sold an untitled sci-fi series to Amazon Studios and that Pedro Pascal will star in the upcoming Star Wars TV series, The Mandalorian. 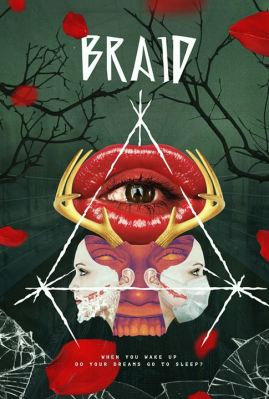 Italian filmmaker Mitzi Peirone funded her film Braid (2018) entirely through cryptocurrency and secured full control of the project in doing so, creating a wild, female-driven, existential psychodrama in the process. Ostensibly about two drug-dealing friends (Imogen Waterhouse and Sara Hay) on the run from the law who arrive at the doorstep of a mentally disturbed childhood companion (Cam‘s Madeline Brewer) who has a safe full of money and a requirement that her bizarre role-playing game be respected. Braid proceeds with a hallucinatory flair that quickly gives way to narrative slipperiness, breakdowns in identity, and hidden motivations. Peirone’s film is brazenly acted, aggressively stylized, densely elliptical, and overly symbolic, easily making it a frustrating and needlessly affected film. Still, I came away from Braid feeling that I had seen something that was probably amazing in its way and likely brilliant on further viewing. Within Braid‘s visual cacophony is a puzzle that may not have a solution but deserves being carefully inspected nevertheless.

The Saskatchewan première of its homegrown, post-apocalyptic action spectacle Supergrid (Lowell Dean, 2018) was certainly a grand success, packing the Broadway theatre with cast and crew, friends and family. The film itself was a by-the-book effort with would-be action stars driving around a resource-depleted wasteland and sounding tough with gravelly voices spoken from stubbly faces. Supergrid is fine, never taking enough risks to actually be good or bad. Thank goodness it had the goalie from Goon (Michael Dowse, 2011). I love that movie.

Saturday’s penultimate film was Brett Simons’ You Might Be The Killer (2018), a meta-slasher comedy about a panicked camp counsellor named Sam (Fran Kranz) on the run from a crazed killer. He calls his horror movie-expert friend Chuck (Alyson Hannigan) who quickly concludes that he is the camp’s masked monster. Once the film quickly reveals Sam’s predicament, YMBTK becomes equally about Sam unpacking his murderous memories of the evening while also avoiding the remaining counsellors intent on killing him and suppressing his own violent impulses. The movie distinguishes itself from being another self-conscious deconstruction of 40 year-old horror tropes with its comedy-forward presentation, choosing a narrative structure and performances that subvert expectations and aim squarely are laughs. Goofy and smart, without pulling any gory punches, YMBTK was a fun, laugh-filled lead-in to Crisis Jung‘s even more bizarre blend of violence, humour, and horror.

The SFFF’s short film pairings were almost stunningly on point and without any obvious disappointments. Society opened with Daniel DelPurgatorio’s Third Wheel, another cautionary short about first dates with sexually aggressive women that anticipated Society‘s false flattery and its piles of indistinguishable flesh. BJ Verot’s impressively realized and atmospheric Echoes in the Ice (2017) kept up Prospect‘s frontier spirit with a group of arctic explorers stumbling up on a Lovecraftian horror, while Rafael De Leon Jr.’s Goodbye Old Friend (2018) matched Braid‘s life-and-death game-playing with a story about a woman’s resentful imaginary friend. The vampiric Tick (Ashlea Wessel, 2018) showed up Supergrid as an inventive Canadian production imagining a post-apocalyptic world set on grid roads, in small towns, and out in the bush. The Bloody Ballad of Squirt Reynolds (Anthony Cousins, 2018) hilariously matched the comedy camp terrors of You Might Be The Killer and the animated madness of FlyTrap (Connor Bland, 2018) nicely opened for Crisis Jung.

Our wrap-up of Sunday’s program will come up shortly, after which MMC! will return to the films of Ithaca Fanastik and some more imagined editions for the Criterion Collection, Shout Select, and Arrow Video!