HORRIBLE MUTATION IN ONE EASY-TO-TAKE SUPPLEMENT!

In the Melbourne suburb of Homesville, the residents of the Pebbles Court cul-de-sac enjoy their middle-class comforts unaware that they participate in experimental testing of a “dietary supplement” called Vimuville. Suspicions are raised by a mysterious man who crashes his car into their small community but no one sees the unearthly tentacles that erupt from the man’s gaping neck wound and force their way down his throat. Soon after, the folks in Pebbles Court quickly find themselves deforming, mutating, and exploding in hilariously frightening ways that involve living mucous, rib removals, killer placentas, giant tongues, exploding erections, collapsing craniums, cannibalism, and BODY MELT!

Co-written and directed by Philip Brophy of the experimental rock group → ↑ → and featuring the gory special effects magic of Braindead‘s Bob McCarron, Body Melt is a splatstick classic in the spirit of early Peter Jackson, hailed by Quentin Tarantino as “the best movie of its kind since Re-Animator” and “the best Australian film of the ’90s.”

Body Melt opens with a trio of sequences that declares the film as a monstrous satire of the health and supplement industry. The film opens with a slick infomercial touting Vimuville, an elaborate health and leisure centre. Company spokeswoman Shaan (a smart and vampy Regina Gaigalas) glides through the facility with officious authority, eventually trading her clipboard for a mattress and a seductive invitation to “come and find out what it’s all about.” This quick transition from corporate promotion to late-night sex-chat commercial comfortably shifts the movie from the texture of cheap video production to the realism of film and the hard blue iridescence of a tanning room where Shaan sits naked, her oiled body sleek and shiny, while research chemist Ryan (Robert Simper) lays in post-coital repose. The scene is far from romantic however as Shaan injects Ryan with a glowing green hotshot of “V-59,” presumably a version of the centre’s namesake drug (which stands for “VIsceral MUscular VItalization of Latent Libidinal Energy” – as wordy and intimidating a descriptor as one might find). While Ryan’s veins nearly jump out of his skin, Shaan then calls to inform a superior that Ryan won’t survive the morning and that their “unethical experiments in Homesville” and the “guinea pigs in Pebbles Court” will remain their secret. After a quick and very dated computer survey of Vimuville’s unknowing test subjects and Ryan’s departure from the facility, Body Melt advances to the next morning where a haggard looking Ryan stops at a gas station to buy and drink a bottle of dish soap in order to stave off his corporeal breakdown. He eventually makes it to the suburban cul-de-sac of Pebbles Court but is unable to warn its residents of Vimuville’s dangers, crashing his car while tentacles emerge from his body and choke him to death, and then recede when authorities arrive to examine the strange scene. 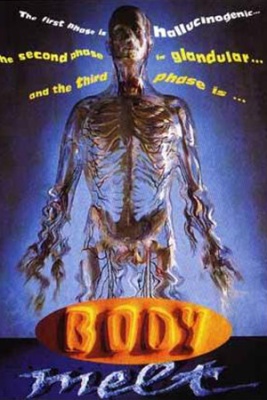 By its opening, Body Melt peels off the seemly and unseemly of the commercialized health industry – from its professional image that can’t help stooping to salaciousness to sell itself to its decadent and ruthless behind-closed-doors dealings to the monstrosity it creates without concern. Brophy, the film’s director, co-writer, composer, sound designer, mixer, and author of short stories that serve as its source material (as well being the supplier of a pair of testicles that briefly appear on a television screen – check those credits!), sets the table for a gruesomely incisive, Cronenbergian skewering of the pharmaceutical industry, however the remainder of Body Melt is far more concerned Peter Jackson-like gore. One by one, the residents of Pebbles Court (and some of the staff at Vimuville) meet horrible ends, with Body Melt playing out like an anthology of suburban transmogrification and death. Some scenes are tenuously linked by the investigation of senior detective Sam Phillips (Gerard Kennedy) and his cocky junior partner Johnno (Andrew Daddo), but their appearances are too infrequent and their efforts too ineffectual to make Body Melt an appraisal of corporate morality. 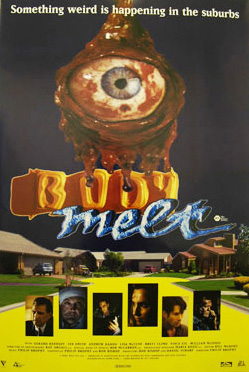 While hardly a horrific commentary on Big Pharma, Body Melt is a celebration of splatstick insanity, both in Pebbles Court and Vimuville. Vitamin-chugging bachelor Paul Matthews (William McInnes) becomes enamoured with a bone-extracting hallucination. Supplement-taking mother-to-be Cheryl Rand (Lisa McCune) discovers something disturbing growing inside her and her rogue placenta is hungry for her husband Brian (Brett Climo). Health-nut Thompson Noble (Adrian Wright) takes his wife Angelica (Jillian Murray) and his kids Elloise (Amanda Douge) and Brandon (Ben Geurens) to a luxury weekend at Vimuville that ends in hideous and deadly mutations for them (as well as the musclebound, helium-voiced staff). Even Sal Ciccone (Nick Polites) and Gino Argento (Maurie Annese), a pair of horny young men on their way to Vimuville for sperm donation, are not free from the drug’s influence. The pair are randomly waylaid at an outback garage staffed by malformed cannibals under the authority of Pud (Vincent Gil), a former scientist at Vimuville and partner to its current head, Dr. Carrera (Ian Smith). Perhaps it’s a statement on the insidiousness of the wellness industry, on the inability to contain things like GMOs once introduced into cropland – or maybe it’s just an excuse to exploit the trope of the inbred, rural monster. By this point in the film, Body Melt really isn’t about consumer society or how the health business is inherently and dangerously disingenuous. It’s about twisted physiognomies, gruesome deaths, and an abundance of bodily fluids, and Body Melt is a decided success by that standard.

Brophy once remarked that at the time he “though it would be a barrel of monkeys to kill a whole lot of soapie stars in a feature film.” For fans of Australian television, Body Melt has the added novelty of seeing a wide array of television stars from well-known series like Neighbours, A Country Practice, Sea Patrol, and Blue Heelers meet garish and inexplicable ends. I’ve read that North American audiences should imagine watching the cast of Friends suffering from gill-like wounds, exploding genitals, and liquefying faces to approximate Body Melt‘s domestic experience. (As if you needed another reason to imagine that!) In a sense, Body Melt might be the most Arrow Video-ish film that MMC! has proposed. The movie is an unrepentant parade of Ozploitation gross-outs and would sit very nicely between Arrow Video’s edition of The Stuff (Larry Cohen, 1985) and the films of Troma Entertainment. Montreal’s Fantasia Film Festival just announced a screening of a new 2K restoration of the film compliments of Vinegar Syndrome, so maybe MMC! is on to something (as VS has done lab work for many Arrow Video titles) or maybe we’re way off (and a version of Body Melt is in the works from another label like Severin). Either way, cult film fans should be on the look out for a hard media release of the Aussie gore-fest and thankful for the work done by small labels like Arrow Video and Vinegar Syndrome.

Credits: This imagined Arrow Video edition borrows heavily on the Umbrella Entertainment Blu-ray release of Body Melt. To that, we added Brophy’s 47-minute short film and chose film critic Adrian Martin to provide an essay based on his piece for Film Alert 101 celebrating the Umbrella Blu-ray.

This post owes further thanks to Dan Gorman’s review for Modern Superior, Madelyn Sutton’s review for Silver Screen Riot, Ian Barr’s appreciation for SBS, and Samuel Glass Jr.’s review for Beneath the Underground.