The Criterion Collection, a continuing series of important classic and contemporary films presents Puzzle of a Downfall Child.

Based on his own interviews with troubled fashion model Anne St. Marie, Jerry Schatzberg’s Puzzle of a Downfall Child is an unnervingly intimate, narratively-fragmented portrait of a top fashion model in personal and professional decline. Faye Dunaway, fresh from her star-making role in Bonnie and Clyde, delivers a tour-de-force performance as Lou Andreas Sand, once a celebrated model now shored up in an isolated beach house struggling to maintain her partial grasp on reality. Directly influenced by the European art cinema of Alain Resnais, Ingmar Bergman, and Michelangelo Antonioni and boasting a screenplay by acclaimed screenwriter Carole Eastman and supporting performances by Barry Primus, Roy Scheider, and Viveca Lindfors, Puzzle of a Downfall Child is a visionary film emblematic of the disenfranchised subjects, art-film sensibilities, and young, creative filmmakers that made the New American Cinema.

Prior to the release of Puzzle of a Downfall Child (1970), director Jerry Schatzberg was a successful fashion and celebrity still photographer, working for magazines like Vogue and Esquire, taking the cover photo to Bob Dylan’s Blonde on Blonde album, and shooting his one-time fiancé and future lead actress Faye Dunaway for Newsweek. It was during his shoot with Dunaway that he first pitched the idea for Puzzle, the story of a former top fashion model’s mental breakdown based in large part on Schatzberg’s interviews with popular 1950s supermodel Anne St. Marie. The script was written by acclaimed screenwriter Carole Eastman (under the name Adrien Joyce), herself a Vogue cover girl in addition to writing screenplays for films like The Shooting (Monte Hellman, 1966) and Five Easy Pieces (Bob Rafelson, 1970). Eastman replaced a French screenwriter paired with Schatzberg. The film’s title, a reference to an abortion, is the only holdover of that previous script and the only thing to which Eastman truly objected, however Schatzberg couldn’t shake the title’s ring. Dunaway garnered a Golden Globe nomination for her performance but Puzzle was ambivalently received, and despite its growing appreciation, the film still has no release for home-viewing in North America.

Puzzle of a Downfall Child is ostensibly a fictional biography told on reflection by its subject, waning top model Lou Andreas Sand (Faye Dunaway), however the film quickly reveals Sand as a most unreliable narrator and its accounts and flashbacks instead become descriptions of the model’s struggling psyche. The film’s present is located at Sand’s isolated beach home on Fire Island where she is interviewed by her friend, photographer Aaron Reinhardt (Barry Primus). A tragic life is recounted that suggests, but never fully explains, an exploitative relationship with an older man while Lou was still a girl, a difficult and objectifying career as a photographer’s model, a failed engagement to an executive named Mark (Roy Scheider), drug abuse, attempted suicide, and institutionalization. What is more, the misfortune of Lou’s existence is deepened by its uncertain presentation. Frequently, Sand’s perception of the events that surround her fail to align with their reality, whether it be through her account directly contrasting with the depicted content or by her overtly false or manipulated interpretations of her encounters. The effect is to create a palimpsest of trauma that lays denial and abjection over abuse and oppression, and between them rests the fearsome truth of never knowing the true scope of these events despite Aaron’s best efforts and motivations. 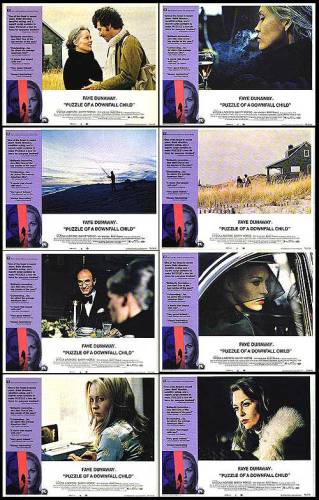 A large part of Puzzle‘s success rests on Faye Dunaway’s captivating central performance. In her autobiography Looking for Gatsby, Dunaway calls the film “yet another examination of the American Dream,” however Puzzle differs from many of the New American Cinema’s revisionist examinations of idealized American values by placing a female perspective into the foreground. Instead of a glamourized view of male rebellion, a deeper, more troubling portrait of patriarchal oppression internalized into its victim is offered. The psychological nature of Sand’s conflict is declared in her unusual name, a pseudonym that hides an apparent reference to Nietzschean psychoanalyst Lou Andreas Salome. Sand is not merely a beautiful fetish object to the men in her life to be loved, possessed, or saved. She is a woman forced to participate in a hegemony that objectifies her. Sand continually presents a façade of desirability and accommodation, while at the same time carefully ensuring that she sufficiently withdraws from her pursuers enough to perpetuate the chase. She reflects that her former fiancé, Mark, “could not stand the mystery that I was.” The compulsion to be perpetually wanted in objectified terms of beauty and status puts Sand in the unwieldy position of always encouraging her own pursuit, never being able to rest or to reveal herself, always appearing glamourous and necessarily out of reach. For Dunaway, this fixation was felt personally – “It was the legacy of my father and his leaving that I was forever trying to change. That’s the Gatsby dream–dance hard enough and fast enough and you will make him stay.” Dunaway’s achievement in Puzzle arrives by not merely having Sand play the victim of the patriarchy that surrounds and exploits her, but by revealing the insidious nature of that dominance by having Sand become her own torturer in the service of that tyranny. Every fluttered eyelash, every impetuous change of heart, every self-aggrandizing lie is an act of denial taken to its extreme, and Dunaway is a revelation in crafting this portrait of a soul estranged.

Puzzle of a Downfall Child elaborates on Lou’s inauthentic mythologizing with a slippery, unreliable narrative. Jay Beck suggests that the interview between Aaron and Lou grounds Puzzle, particularly the voice of Aaron that pulls Lou’s compromised flashbacks back toward reality. This is clearly true in the film’s early stages where a dichotomy between Lou’s accounts (such as being luridly gazed at by “lunatic sex fiends” at her first photo shoot) and the portrayed reality (of bored, barely attentive men) is set in ironic contrast. Gradually though, Aaron’s role recedes in Puzzle and he is virtually lost for the film’s latter half, allowing uncertainty to further destabilize Lou’s recollections. We see snippets of Lou’s relationship with a “very famous older man” but she undercuts them with seemingly elusive comments denying the truth of her own account. We see her with a black eye following a fight with Mark but can’t confirm if it’s from a slap, a shoved front door, or some unrevealed event. By the time Lou is institutionalized (her screaming and flailing entrance presented in conflict with her account of arriving calmly and voluntarily), slippages and unreality dominate to the point that it is impossible to guess at what actually occurs there – doctors change within scenes, agents and photographers appear as staff members, and an all white mise-en-scene creates a space of stylized absorption.

Puzzle‘s diegesis never seems entirely free from Lou’s troubled psyche, even in the beach house present with Aaron. The spare, remote structure surrounded by shifting, windblown sands and marked by a “No Trespassing/Private Property” sign feels like more than pathetic fallacy demonstrating Lou’s troubled isolation; it seems to exist as a further mind-space, a refuge littered with random, over-determined souvenirs of her once acclaimed and agitated life. Lou’s castanets, her wedding dress (white here, black during her remembered wedding day), her busts, and her lost notes are out of place for the location but apt for her internal psychodrama. The film’s motif of Asian mystery, found in multiple references to Anna May Wong (who believed being filmed removed part of her soul), Lou’s asserted ability to speak Mandarin, and Lou’s dramatic Asian eye make-up, extends into the present with a Fire Island neighbour demonstrating Asian-styled boxes to Lou and a lone fisherman on the beach called “the Chinaman” or “Mr. Wong.” Aaron’s presence here is more reserved and cautious, avoiding certain topics and accepting Lou’s admonishments for leaving the toilet seat down. Aaron’s changed demeanour might be read as reflecting a shift in relative power in the internal-made-external space of Fire Island, but the film still ends on something of a troubling note. There, Aaron affirms a memory of Lou’s and provides a comfort to her own self-doubts, but it is also a sanitization of Aaron’s conduct and as such it is yet another expression of power over Lou that denies her true victimization and Aaron’s role in her exploitation. 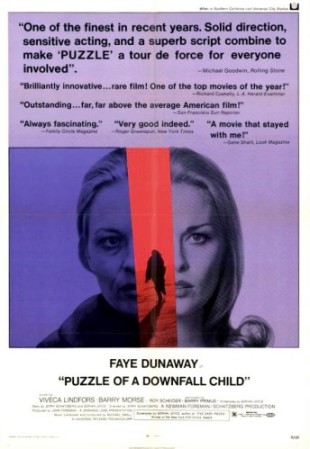 A French Blu-ray of Puzzle of a Downfall Child currently exists – the French always loved Schatzberg’s film, proving once again France’s knack for recognizing quality cinema – but the edition is region-locked, leaving interested American viewers to rely on YouTube to discover the film. With the Collection seeming to place increased attention of late on female filmmakers and stories and with Puzzle being inspired by a woman’s actual career, written by a notable female screenwriter, and starring a bravura female performance, Puzzle would be a timely choice for Criterion and its European art film sensibility fits comfortably into the label’s wheelhouse. The theatrical poster’s split image of Dunaway divided by her running screaming on the beach seems like a natural cover treatment and one that could even be elaborated on further in the process of designing its packaging. This is a wonderful film of the New American Cinema that greatly needs wider appreciation, so here’s hoping it wears a fashionably wacky “C” one day.

Credits: Puzzle of a Downfall Child screened at the 2011 Cannes Film Festival as a Cannes Classic and so a restored version of the film exists. All of the special features cited above are invented for this imagined edition of the film, with the exception of the alternate opening prepared by the studio which did exist but may now be lost. In that opening, Aaron provides an introduction to better orient American audiences through their unsteady trek through Puzzle. French playwright Elisabeth Bouchaud was chosen to speak on the film for having adapted it into a two-character play called Puzzle in 2017. Drake Stutesman was chosen to speak on the role of fashion in Puzzle of a Downfall Child further to her essay “Rite of Passage: The Hat That Wouldn’t Disappear in the 1960s” in the book Film, Fashion and the 1960s. Jay Beck was selected to discuss Puzzle‘s sound for his analysis of the film in his book Designing Sound: Audiovisual Aesthetics in 1970s American Cinema. Bruce LaBruce was chosen to provide an essay further to his appreciation of this film in his “Bruce LaBruce’s Academy of the Underrated” series for Talkhouse.

This post owes a great debt to the “Women in New Hollywood” episode of The Film Comment Podcast, as it was there I was first introduced to the film. The Projection Booth‘s podcast on Puzzle was also of great help, providing excellent analysis and including interviews with Jerry Schatzberg and Barry Primus as well. Thanks also to Filmbrain‘s post, Ken Anderson’s lengthy post at Le Cinema Dreams, and Interview‘s discussion with Jerry Schatzberg.

One thought on “Puzzle of a Downfall Child (Jerry Schatzberg, 1970)”