FROM BEYOND OBLIVION, THE SPOOKIES ARE HERE AGAIN!

An old, abandoned, isolated mansion seems like the perfect place for a group of young couples to party and let loose, but it may be perfect trap to lose their souls. Inside, a strange Ouija board leads the group into a supernatural web of terror, all plotted by an ancient sorcerer gathering sacrifices to restore his unwilling bride once again to life. Just a few more humans are needed to complete his spell …

A dizzying array of monstrous creatures are conjured by the wizard – hellish lizards, skeletal reapers, demons, zombies, seductive spider women, entrancing ghosts, and flatulent muck men, all empowered with a singular instinct to kill – and one by one, each guest is victim to this twisted, supernatural onslaught. Nothing can prepare you for the incredible special effects of Spookies, a horror cult classic that must be seen to be believed!

Few things galvanize horror fans like practical effects. Fearsome beasties, graphic prosthetics, and plenty of corn syrup blood are near essential components to the genre. Just one good creature or splattering death can elevate a horror film into being something memorable, although the infrastructure of effective storytelling (things like plot and acting) usually can’t be sacrificed at the altar of latex terror and still produce a classic. Spookies (1986) may be the exception to that rule. This chockablock monsterfest seems to prove cinematically that too many cooks spoil the broth, although that particular metaphor may not be entirely apt – we’ll find a better one by the end of this piece.

The movie’s generous mess of narrative threads and random monster encounters makes it difficult to encapsulate in any appealing way, however the troubled production history of Spookies makes its jumbled up horror scenarios utterly fascinating. While MMC! will hit the high points, those looking for detailed, firsthand accounts of the film’s making should read Max Evry’s oral history over at The Dissolve. Evry recounts the odd characters, production overruns, tragic deaths, power plays, and creative mishandlings that left the film’s participants still holding grudges. 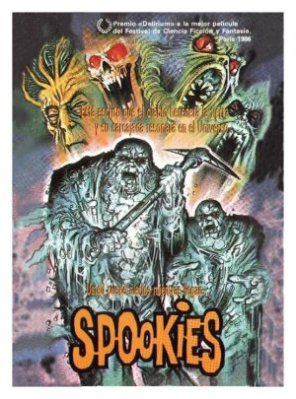 Spookies began as Twisted Souls, written and directed by first-time directors and childhood horror fans Brendan Faulkner and Thomas Doran and produced by an inexperienced British film producer, Michael Lee, who proposed financing their project Hellspawn if the two could first deliver a more conventional scary movie for distribution by Lee. Faulkner and Doran banged out the script for Twisted Souls in two weeks, worked through four to six weeks of preparations, and filmed on the John Jay Estate in Rye, New York, for about 3 months with a budget of $250,000. (The shooting time seems to have roughly doubled from the initial plan and the budget escalated to over $300,000.) Faulker and Doran shot the movie with the assistance of special effects technician Al Magliochetti (who later worked on numerous major Hollywood productions), makeup artists Gabe Bartalos (16 years-old at the time and later a key figure in the Leprechaun franchise) and Jennifer Aspinall (later nominated for ten Emmys, winning one), and cinematographer Ken Kelsch (an ex-Green Beret whose son died tragically of crib death on-set early in the production and who later became the recurring cinematographer of Abel Ferrara). Ultimately, Twisted Souls reached about 90% completion and a two and a half hour rough cut was prepared.

With offers from studios coming in based on the footage seen, Lee (whose constant shooting notes and captious budget oversight had already marked him as a difficult collaborator) screened the rough cut for a Golden Harvest executive who felt it was too slow. Unable to foresee a shorter cut being made, Lee fired Faulkner and Doran from the project, asserting that all his money had been wasted. Lee was left at that point with a nearly completed film – a haunted house spookfest aimed at overwhelming the audience with a seemingly endless array of unique monsters.

The set-up for Twisted Souls involved two carloads of young(-ish) people who apparently can’t stand each other arriving at an abandoned colonial home to “check it out” and presumably “party.” Among the group of nine is Duke (Nick Gionta), the abrasive bully/leader (“Look at me, I’m Duke the horny ghost.”); Linda, Duke’s suffering, top-heavy girlfriend (Joan Ellen Delaney); Meegan, Linda’s loyal friend (Kim Merrill); Meegan’s considerably older boyfriend Peter (Peter Dain) who seems constantly on the cusp of muttering “damn kids;” and Rich (Peter Iasillo Jr.), the wacky friend who speaks with the assistance of a hand puppet and wears a T-shirt bearing a picture of himself and the hand puppet. After one the group becomes possessed through an unusual Ouija board they discover, the group must defend themselves against lumbering Muck Men who burst from the basement floor, a ravenous Spider Woman who drains men dry, an animated Grim Reaper statue, and various cursory demons and lizard monsters. As a collection of creature-FX encounters, Twisted Souls would have been visually impressive and sufficiently entertaining. Some minor animated sequences were all that stood between the producer and a releasable product, but convinced that the project was deeply flawed, Lee took another route. 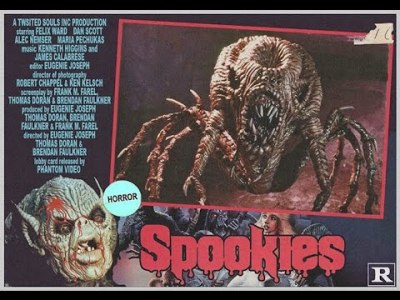 After apparently consulting some individuals in the porn industry who ran down the rough cut of Twisted Souls, Lee hired Genie Joseph, then an editor with Troma who got her start in the soft-core documentary Acting Out (Ralph Rosenbaum and Carl Gurevich, 1978). Joseph had relatively little experience at the time and was not overly fond of the horror genre, but it was a significant opportunity for a female filmmaker before the video age. Joseph’s solution to the film’s perceived issues was to keep about 45 minutes of Twisted Souls and, with the help of cinematographer Bob Chappell (who would go on to become the regular cinematographer of Errol Morris), shoot a parallel framing narrative that would restore the film to feature length. And with Lee wanting the production to proceed without any coordination with the previous cast and crew, Joseph and Chappell assumed a freedom to take liberties with the style already established in Twisted Souls.

Joseph’s contribution to what became Spookies begins with a 13 year-old boy who’s run away from home on his birthday.  When he discovers a party set up in the empty mansion, he assumes his parents have reversed their neglect, because that’s what parents do – push a child into running away, then anticipate the path of his flight and set up party in the dilapidated estate along the way.  It doesn’t really matter though, as the boy is quickly dispatched by an evil sorcerer named Kreon (Felix Ward) and a gypsy werecat with a hook-hand (Dan Scott). Joseph’s framing story places Kreon as the puppet master to the party-goers’ possessed friend and the orchestrater of their terror, with his goal being to gather enough lives to revive his unwilling bride Isabelle (Maria Pechukas). A zombie uprising, a rickety-looking witch, and Korda (A.J. Lowenthal), the blue-skinned son of Kreon, are added to the mix, but the most bizarre addition to the film is the sound of farting that appears constantly through the Muck Men sequence. What began as a gag by the sound designer turned into a demanded inclusion by Michael Lee, and while Joseph wanted to quit on the spot, Lee paid the bills and called the shots and so the flatulent Muck Men now stand as the calling card of the debacle that was Spookies. 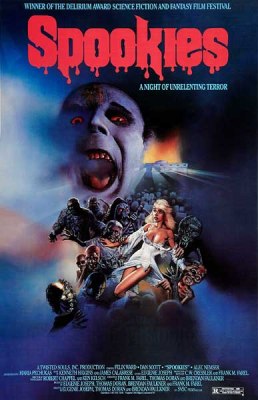 Faulkner and Doran might feel that Lee and Joseph massacred Twisted Souls, but it’s hard to see a horror classic hidden within the goombas and hand puppets they committed to film. Instead, the dial-a-monster format they aimed at seems better for the stylistic incursions that made Spookies. Roger Ebert’s words come to mind:

Most exploitation movies are bad, but not necessarily painful to watch. They may be incompetent, they may be predictable, they may be badly acted or awkwardly directed, but at some level the filmmakers are enjoying themselves and at least trying to entertain the audience.

Faulkner, Doran, Joseph, and even Lee all aimed to produce an entertaining movie. Likely the best parts of Twisted Souls relate to its visual effects and those remain in Spookies, however it’s in Joseph and Lee’s refusal to be beholden to the tone and aesthetic of their footage that Spookies becomes truly memorable. The film has the feeling of serving multiple masters, imbuing the film with a sense of unpredictable possibility that would not be possible under a single artistic vision. And say what you will about the egregious insertion of farting sounds over the well-designed Muck Men, it transforms a well-executed horror scene into something indelible. There is an alchemy in the frantic, nearly incoherent eclecticism of Spookies that makes it more than another ’80s horror flick. There is a true danger within Spookies, a sense that it might fearsomely, hilariously betray itself, cannibalize itself, if given enough time. The fact that it simply ends rather than actually resolving may evidence the truth in that observation. The success of Spookies comes not by being a spoiled broth, but in being an unwieldy box of monstrous chocolates – for 85 minutes, you truly never know what you’re going to get.

Spookies may be an ambitious wish for the Arrow Video label. While a cult favourite among horror fans, the movie has had a spotty life on hard media and confusion regarding its rights have seemingly prevented a high-def edition from reaching the market. We’re hopeful that Arrow Video can save a beloved horror film and find a place on a new Blu-ray edition for Richard Corben’s great poster.

Credits: Most of the special features proposed here are based on actual content already in existence. Filmmaker introductions have been given at screenings of Spookies although it’s not clear who those filmmakers were and so we’ve left that uncertain here as well. Given many of the hard feelings over the production and Max Evry’s extensive work on the film’s history, we chose Evry to supply a commentary. Valbrio, Magliochetti, and Farel have all given interviews on Spookies in the past and so we chose them for interviews here, although Arrow Video is great for documenting the backstory to their releases and so we hope that further participants in the production might also be interviewed. Magliochetti apparently still holds the film’s original ending and so we chose to include that as well. Brian Albright is the author of Regional Horror Films, 1958-1990: A State-By-State Guide with Interviews and his book includes discussion of Spookies, and so he was chosen to provide a booklet essay. The cover synopsis is inspired by a previous DVD edition’s summary.