American Alan Whitmore (Roland Wybenga), a professor of languages translating ancient texts for the Intextus Project, is sent to Budapest to find his colleague Professor Roth, a researcher who has gone strangely silent and who has failed to deliver his final report on an ancient religion. In the Hungarian capital, Alan is met by Roth’s beautiful assistant Genevieve Weiss (Paola Rinaldi) and commences his search for Roth and the ancient spider-cult that his colleague had uncovered. Can Alan discover the secret of these unnatural cultists and stop their murderous ways or will he become lost in the pagan sect’s web of paranoia, terror, and brutality?

Gianfranco Giagni’s The Spider Labyrinth blends Lovecraftian horrors with giallo stylishness and a gothic atmosphere to create a doom-laden masterpiece of 1980s Italian horror. Sergio Stivaletti’s terrifying effects are exceptional, bringing The Spider Labyrinth to its mad, shattering climax and confirming it as a little-known horror tour de force. 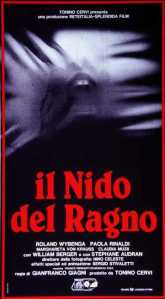 Most reviews of Gianfranco Giagni’s The Spider Labyrinth (1988) start off by remarking on the lamentable state of Italian horror cinema by the 1980s, then defend the film as an underappreciated slow-burn chiller. With its oppressive air of conspiracy and dread and its secretive cult quietly plotting at the edges of the movie, these reviewers most often compare the film to “conspiracy gialli” like Pupi Avati’s The House with Laughing Windows (1976), although Charles P. Mitchell’s more contemporary comparison to Roman Polanski’s The Ninth Gate (1999) almost feels more àpropos. Like these other films, The Spider Labyrinth (Il nido del ragno) slowly sinks, or perhaps meanders, into its unease until concluding with as horrific and terrifying a sight as MMC! has beheld. (My wife is under strict direction not to watch Giagni’s film for fear of never sleeping again.)  Let MMC! introduce you to one of the best horror films you probably haven’t seen – The Spider Labyrinth, a highly atmospheric horror film that lulls its viewer with its quiet unease, then shocks and awes at its insane, monstrous conclusion.

Roland Wybenga is Alan Whitmore, an ostensibly young and handsome professor of ancient languages innocently working for the obviously nefarious Intextus Project. From a conference room in a Dallas highrise, Alan is directed by a priest (Bob Holton) and two executives (John Morrison and Bill Bollender) associated with the Project to travel to Budapest to reestablish contact with another Intextus professor who has gone silent in advance of delivering his final report on an ancient religion. Consequently, Whitmore makes the trip to Hungary to find one Professor Roth (László Sipos) and either bring him back into the fold or at least collect his findings. He is met in Budapest by Roth’s beautiful assistant Genevieve (Paola Rinaldi) and is set up in a strange hotel run by Mrs. Kuhn, a bluntly banged Stéphane Audran who spends her nights rocking the empty cradle of her lost child. Does it matter that Alan’s character is established by the traumatic memory of being trapped inside a wardrobe with a spider? I don’t think so either – too on the nose.

Whitmore struggles to navigate his way through Budapest, frequently becoming lost or disoriented. He does eventually locate Professor Roth who has become paranoid following the discoveries made by his research. Alan is warned by Roth’s wife Celia (Margareta von Krauss) to disregard his mad stories, but Whitmore accepts from Roth his journal and a tablet said to disclose the names of sinister immortal beings worshiped by a secret cult. From there, Alan is warned by various individuals, including Roth, a “Mysterious Man” (William Berger), and a chambermaid named Maria (Claudia Muzi), to leave Budapest for fear that he will be killed by these evil cultists called “the Weavers” (identifiable by the spider-shaped mark on their forearms). Whitmore nevertheless remains, driven to investigate the subsequent murders of his would-be protectors by a fanged, web-spitting monstress seeking to preserve the secrecy of the age-old cult.  Despite successfully fighting off the spider-witch, Alan is ultimately captured by the Weavers. Their eight-legged god (and its host) is revealed to Whitmore, ultimately bringing a doom to him and the Intextus project waiting in Dallas.  (We’re being uncharacteristically spoiler conscious here in deference to Giagni’s fearsome ending, but those looking to peek in on its fraught and frantic climax can click here.)

The mysterious atmosphere that carries much of The Spider Labyrinth is well-achieved. Giagni’s emphasis on the strange, possibly witchy women that surround Alan effectively trades on associations to Dario Argento’s Three Mothers Trilogy and the work of Mario Bava, particularly during the sequence of Maria’s murder in a maze of hanging bed sheets. Franco Piersanti’s score is vigorous and unsettling, Stefano Ortolani’s production design is gothically oppressive, and Sebastian Celeste’s cinematography is shadowy and foreboding, bringing to mind the tenebrism of a macabre Caravaggio. Sergio Stivaletti’s special effects, which include fabricated models and stop motion animation, look slightly creaky but feel perfectly unreal in The Spider Labyrinth‘s feverishly intense climax.

For those unwilling to grant Giagni the charity of meeting his film on its own terms, the flatness of its characters stands out. Virtually all of The Spider Labyrinth‘s personae seem inscrutable cyphers, including its main character Alan Whitmore (the choice to hide Whitmore behind glasses and beard is an unusual one that makes this underwritten, under-performed character all the more blank), but the impenetrability of The Spider Labyrinth‘s figures is perfectly complimentary to its roots in the mythos created by H.P. Lovecraft. In his 2001 book, The Complete H.P. Lovecraft Filmography, Charles P. Mitchell calls The Spider Labyrinth “one of the finest of all films inspired by Lovecraft” and “one of the most eerie, atmospheric and effective horror films of the past two decades.” Giagni’s film may switch out tentacles and fishmen for sticky webs, fanged mandibles, and segmented legs, but The Spider Labyrinth remains a work of Lovecraft in its dark, sleeping heart. Giagni relies on the hallmarks of these stories – the secretive cult of worshipers; the hidden, ancient, monstrous gods; the academic driven mad by his findings; the young scholar lost in an eldritch world; the compromised, unhappy ending. Perhaps most importantly, The Spider Labyrinth captures the almost mundane unreality of Lovecraft’s work. Alan stumbles upon something that has always existed at the periphery of our world. There are no prophecies to interrupt, no cataclysms to prevent. The Weavers and their ancient god have always been here and will always remain, regardless of the efforts of one puny professor or a small group of power-hungry mortals waiting back in Texas. The Weavers and their Old Ones are a reality unto themselves and The Spider Labyrinth slowly sheds away the trappings of Alan’s rationalist perspective for the nightmarish sleepwalk that encloses the film by its end. In its way, it is dream cinema as it is rarely represented – uneasy, impenetrable, encompassing, eradicating.

Gianfranco Giagni’s The Spider Labyrinth has unfortunately become lost itself in the maze of 1980s horror video schlock, leaving only bootleg editions (some marred by Japanese subtitles) and the occasional upload to YouTube to surprise inquisitive cineastes.  Arrow Video is a wonderful resource to Italian horror film fans and already has a connection to The Spider Labyrinth through Sergio Stivaletti’s special effects work on Phenomena (Dario Argento, 1985), so a new, hi-definition edition of Giagni’s film seems only natural. It would press the label’s Italian catalogue into news directions while at the same time speak back to some of Arrow Video’s most popular gialli titles. And besides, we all need a little more Lovecraft in our lives – at least the squelching, terrifying bits; not the bitterly racist stuff.

Credits: Not much is out there celebrating The Spider Labyrinth, so we’ve been hard-pressed to find critics to advocate for the film on an Arrow Video edition. We’ve chosen Kim Newman to provides an essay given his past associations with the label and given the passing reference made to Giagni’s film in his book Nightmare Movies. S.T. Joshi and Sandy Petersen were selected to speak on the film as experts given their recommendation of the film to The Lovecraft eZine, and we hope Stéphane Audran, Paola Rinaldi, and Franco Piersanti all have good feelings and lighthearted views on being involved in this horror film. Lastly, we have high hopes for the proposed interview with Sergio Stivaletti, hoping he provides insight on his work as he did on Arrow Video’s edition of Phenomena and aware that many of his models for the film remain intact as they were on display at the 2011 Italian Horror Festival.

One thought on “The Spider Labyrinth (Gianfranco Giagni, 1988)”