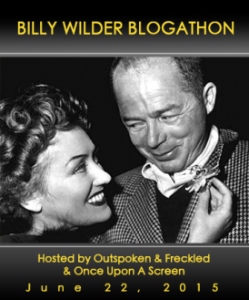 The 2015 Billy Wilder Blogathon is upon us, hosted by Outspoken & Freckled and Once Upon a Screen.  We participated last year, but are happy to just observe this time around.  Lots of great posts already up and still more are scheduled to come.  There’s even a fantastic gallery of behind-the-scenes photos from Wilder’s sets (with Marilyn Monroe looking particularly fetching).

For those of you distraught and heartbroken by our absence, you can re-discover our post advocating for Kiss Me, Stupid (Billy Wilder, 1964).  Olive Films has since released on Blu-ray a restoration of the film’s international cut, offering a version of the film before it was edited slightly to satisfy the Catholic Legion of Decency and moved over to Lopert Pictures for distribution.  Fans of Kiss Me, Stupid will find a much improved transfer, but will likely want to hold onto their MGM DVDs for comparison’s sake.