Ray Milland stars in this modernized Faustian tale as the mysterious Nick Beal, a Mephistophelean tempter who emerges from the fog to corrupt District Attorney Joseph Foster (Thomas Mitchell) under the guise of helping him convict an elusive gangster.  Foster’s success turns to a bid for governor and Beal is only happy to help with the uncertain assistance of devil doll Audrey Totter, a fallen woman who has her own issues with Nick.  Little known and difficult to see since its initial release in 1949, the Criterion Collection is proud to present John Farrow’s Alias Nick Beal, a brilliant and atmospheric work of supernatural film noir.

John Farrow’s little seen gem, Alias Nick Beal, has made various appearances at festivals and special screenings over the last year compliments of a new 35mm archival print preserved by Universal Pictures.  The film made little impact when it was released in 1949; even less so when released in the UK as The Contact Man.  The internets tell us that unspecified legal issues prevent Alias Nick Beal from being aired on TV or released on hard media, yet that hasn’t prevented the film from developing a small audience of devotees that hail it as an unappreciated masterpiece in the subgenre of supernatural noir.  And with Halloween approaching, this seemed like the ideal time to promote Alias Nick Beal as a potential Criterion title.

Despite third billing, Alias Nick Beal stars Thomas Mitchell as honest DA Joseph Foster, a crusading everyman who sponsors a boys’ club and work tirelessly to bring down a local crime boss and racketeer named Hansen.  Consistently frustrated in his efforts to convict Hansen, Foster fatefully exclaims, “I’d give my soul to nail him!” and later receives a mysterious summons that reads, “If you want to nail Hansen, drop around the China Coast at eight tonight.”  Foster attends the shabby, dockside bar and meets Nick Beal (Ray Milland), a polished and confident man who mysteriously emerges from the fog.  In a nearby cannery, Beal offers Foster Hansen’s ledgers, believed to have been incinerated and unavailable.  The documents make Hansen’s guilty verdict a certainty, but Foster has no warrant to obtain them and risks losing the materials if he doesn’t act immediately.  With Nick having mysteriously vanished, Foster takes the books, gets his conviction, becomes a hero in the press, and is sought after by the Independent Party to run for governor as its nominee.  The opportunity to work as governor would provide Foster with an opportunity to effect real change and he’s surprised when Beal appears at his home not to extort money from him, but to contribute to his campaign.  Foster’s wife rejects Beal’s offer, but Old Nick isn’t done with good Mr. Foster.

Back at the China Coast, Beal enlists the aid of Donna Allen (Audrey Totter), a failed actress-turned-barfly of whom Nick is unusually knowledgeable.  Allen is suspicious of her new benefactor, but is easily seduced by furs, jewelry, and a seemingly straight job at a boys’ club.  She takes to her assignment of sympathizing with Foster, nearly even seducing him, and encourages his backward slide from his moral high ground.  Joseph doesn’t so much become greedy or power mad, as he becomes willing to compromise his standards in an effort to eventually attain a position where he can do the most good – the path to Hell is, of course, paved with good intentions.  By the time Foster wins the election, he has lost the confidence of his closest supporters, including his wife, Martha (Geraldine Wall).  Only the boys’ club’s leader, Reverend Thomas Garfield (George Macready cast against type), suspects the infernal nature of Mr. Beal(zebub) and remains an ally to Joseph.  Foster ponders Beal’s offer to remove any suspicion of his involvement in the death of Hansen’s accountant and free him from damnation in exchange for the state’s seal, but ultimately refuses by resigning and admitting his fraud in Hansen’s conviction.  Joseph’s soul is saved thanks to the intervention of Martha and Rev. Garfield who stand up to Beal and force him to abandon the contract by dropping Garfield’s Bible on it, a neatly clever and appropriately cagey manoeuvre in keeping with Beal’s elegantly simple actions to corrupt Foster.

John Farrow called Alias Nick Beal “good in every sense of the word.  I said what I wanted to say, and the way I wanted to say it, without any studio interference.”  Farrow was a bundle of contradictions – a devout Catholic scholar who was appointed a Knight Grand Cross of the Order of the Holy Sepulchre by Pious XI, a prolific director of 46 films who won the Oscar for Best Adapted Screenplay for Around the World in 80 Days (Michael Anderson, 1956), a scandalously bold womanizer, and a notoriously difficult director on set who was called “a sadist” by Robert Mitchum and who was demanded a public apology by Barbara Stanwyck.  Considering Farrow’s background and this tale of evil acting directly upon the lives of honest men and women to corrupt them, it’s easy to take the director’s description of the film being “made with both inspiration and honesty” at face value.  The screenplay for Alias Nick Beal was written by Jonathan Latimer, adapted from an original story by Mindret Lord.  Lord, who had modest writing career and toehold in Hollywood, sold Nick Beal and another story to Paramount.  Latimer’s adaptation of Lord’s novel was part of a far more distinguished career which saw him start out as a crime reporter, move on to crime and then non-crime fiction, and round out his career as a screenwriter for various films, including Farrow’s The Big Clock (1948) and Night Has a Thousand Eyes (1948) and 31 episodes for the original Perry Mason series.  Lionel Lindon’s cinematography is gorgeous, particularly in his unusual lighting of scenes and his foggy dockside sequences, and Franz Bachelin’s art direction fascinates, from his strangely misaligned China Coast dive bar to Donna’s luxurious apartment with its strange Daliesque mural. Franz Waxman’s score is excellent, particularly his darkening fanfare that opens the film.

Of course, the film’s best lines go Milland as the infernal Nick Beal, who sneers at Rev. Garfield, “I don’t do much business with preachers,” and responds to a convert claim to having wrestled with an beaten the devil, “I wonder if he knows it’s two falls out of three?”  It helps Beal’s air of supernatural power and authority that Farrow never actually depicts his entry or exit from any particular scene.  Milland’s time as a heroic leading man had come and gone with his stunning performance in The Lost Weekend (Billy Wilder, 1945), but he’s enthralling here as the smoothly predatory Beal, and Mitchell and Totten keep pace in star-worthy turns as a good man losing sight of his values and derelict floozy finding her conscience.  In the film’s best scenes, Beal rehearses with Allen a conversation with Foster in her upscale apartment.  Beal coaches Allen in a word-for-word exchange wherein she seduces Foster, slyly steering him away from the straight and narrow with conflicted morals and undeniable feelings.  Allen denies the possibility that Beal can predict the conversation so specifically, but Beal is certain, and when Allen carries on the charade with Foster, Beal’s plan proceeds like clockwork.  The scene between Foster and Allen is gloriously layered, with Allen sensing an uncanny horror as the exchange plays out as if by rote.  She becomes increasingly panicked as she continues her scripted dialogue, gradually delivering her lines spontaneously and reacting with genuine fear as she begins to appreciate the otherworldly power of Beal.  That scene alone make Alias Nick Beal noteworthy. 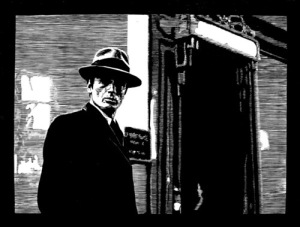 Alias Nick Beal‘s Faustian reworking is also notable for its sociopolitical context.  As noted by Moira Finnie, movie audiences of the time would have sensed connections between the film and the existing era of entrenched corruption and the fight for reform, embodied in figures like the crusading Thomas Dewey, political boss Tom Pendergast, and the recently made permanent House Committee on Un-American Activities.  It’s all too easy to see Farrow’s film as horror noir fluff or the pet project of a capital “C” Catholic director and forget that film noir directly reflects an uneasy time on the American political landscape, but Alias Nick Beal‘s vision of a truly evil force undermining a nation’s institutions and leaders had real social meaning at the time.  In the spirit of an old German legend relocated into American crime cinema, we suggest for a cover treatment Guy Budziak and his film noir woodcuts.  For Budziak, the woodcut is an ideal format for representing noir as it provides a textural link between film noir and its Old World roots in German Expressionism.  Looking at his work, his premise is hard to deny and a woodcut for Alias Nick Beal would be a unique cover treatment within the Criterion Collection.  Farrow’s Alias Nick Beal is a excellent film greatly in need of better popular appreciation and a Criterion Collection edition finally releasing the film for home-viewing would right a longstanding cinematic wrong.

Credits:  We’re starting from scratch with this one.  With Alias Nick Beal recently screening as part of the Film Noir Foundation‘s Noir City 7, a commentary by its founder and president, Eddie Muller, would ensure an insightful and entertaining discussion of the film.  Mia Farrow has provided the Criterion Collection with new interviews on other titles, so we thought providing her with an opportunity to speak about her father and his contradictory character would be a treat.  The Screen Director’s Playhouse radio version of Alias Nick Beal can be downloaded here at Archive.org.  We chose Guy Maddin as an essay contributor given his love of noir, melodrama, and the unnatural, and Inez Hedges for her discussion of the film in her book Framing Faust: Twentieth-Century Cultural Struggles.  We should also acknowledge Moira Finnie’s article at Movie Morlocks, Jake Hinson’s review at The Night Editor, Jim Lane’s article at Jim Lane’s Cinedrome, and Steve-O’s discussion at Film Noir of the Week.