Robert Bogerud (Svein André Hofsø Myhre) runs his own detective office, but he never gets any cases.  He has the hat, the trench coat, the cigarette, and the attitude.  He also has Down syndrome.  When legendary speed skater (and notorious con artist) Olav Starr goes missing, his wife urgently needs an incompetent detective to pacify an affluent and senile grandmother and hires Robert without any desire to find her husband.  But Robert’s unique method of sleuthing, using his extraordinary empathy to immerse himself in the missing man’s secret life of cross-dressing, penis pumps, and fetish models, is the key to cracking the case.  Detective Downs is a twisty noir tale complete with femme fatales, shocking conspiracies, stunning betrayals, and a headstrong hero who will do anything to get to the bottom of the case.

Perhaps it’s important to acknowledge at the outset that Detective Downs is not the kind of film that usually gets a post on MMC! because it’s a film we’ve not yet seen.  We try to avoid blind posts like this as we have to rely on secondhand information to describe and endorse the unseen movie.  Detective Downs gets a pass because of a) its successful and award-winning screening at Fantastic Fest 2013, b) its positive critical reception by various genre/cult/paracinematic websites, c) the relationship between Drafthouse Films and Fantastic Fest that suggests Detective Downs could actually find a home in the label’s treasury of films, and d) because the holiday season is upon us and we really, really, really, really, really want to see it.  That said, let’s move on.

Robert Bogerud is a young man with Down syndrome and dreams of being a hard-boiled detective.  He smokes, wears a fedora and trench coat, and has converted his room at a ladybug-decorated independent living facility into a noir-styled detective office.  Still, Robert can’t get a case.  Potential clients drop him at first sight and his police investigator father openly discourages his gumshoe aspirations.  Then, improbably, the wife of Olympic champion speed skater Olav Starr hires him to find her missing husband.  Sure, she and her two grown children have no interest in finding Olav and have hired Robert merely to placate the missing man’s elderly mother, but the sleuth is undeterred and springs on his clients a most unconventional methodology – wearing Olav’s clothes, Robert assumes the life of the missing man (including his position in the marital bed) and employs his massive empathic sense to discover the secret of Olav’s absence.  In doing so, Robert reveals Olav’s kinky, secret world with hilarious effect, making him one of cinema’s unlikeliest and most memorable private dicks.

In fairness, a comedy film having a detective with Down syndrome for its main character (and played by an actor with Downs himself) sounds like a terrible idea, sure to be either highly exploitative or chokingly heartwarming.  Bård Breien’s Detective Downs incredibly manages to walk the fine line between cheap laughs in bad taste and eye-rolling schmaltz and produces something that works.  Granted, some critics found the film a little too lightweight, a little too twee, for the flick’s film noir roots, but more often Detective Downs was received as a refreshing and affable neo-noir comedy, even if it didn’t revolutionize the genre for contemporary viewing.  Its success clearly rests with Svein André Hofsø Myhre’s performance as Robert.  Myhre is clearly doing actor’s work here, having rehearsed for a year with Breien so as to convincingly charm, cry, rail, drink, screw, and even dance his way through Detective Downs.  His performance is real and deservedly earned him the prize for Best Actor at the 2013 Fantastic Fest.  Robert is a fully rounded character, childlike, innocent, even Clouseau-esque, while also afflicted with the needs and failings of a grown man, drinking too much and hound dogging the ladies as the mood strikes.  Perhaps the greatest compliment given to Myrhe and Detective Downs is that it’s very easy to forget that Robert has Downs in the first place, the viewer instead accepting the character and his conflicts on their own terms.  From a provocative, bordering on offensive, high concept, Detective Downs creates something unexpected, funny, and above all humane, never talking down to its content nor taking it too seriously. 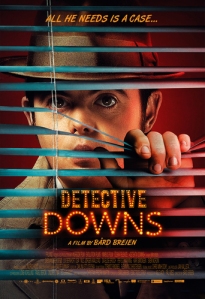 Credits: The cover summary is an amalgam of the Nordisk and Fantastic Fest write-ups on the film.  Detective Downs is only starting to circulate and so we’re guessing at potential features.  A Making Of featurette, deleted and extended scenes, and gag reel seemed like safe bets given the extensive rehearsals done for the film.  A Fantastic Fest feature seemed easy to put together with red carpet interviews and a Q&A session already available.  Breien and Myrhe’s easy rapport (and English proficiency) seemed to make a commentary a necessary inclusion as well.