Igor Maslennikov merges Sir Arthur Conan Doyle’s novel The Sign of the Four and his story “A Scandal in Bohemia” to create the fourth film in his Sherlock Holmes cycle, The Treasures of Agra.  Here, Holmes ruminates on having matched wits with Irene Adler, an American opera singer at the center of a potential scandal involving the hereditary King of Bohemia.  With Adler still occupying his mind, Holmes investigates the case of Mary Morstan, who searches for her missing father, an unknown benefactor who sends her a single pearl annually, and a missing family treasure.  Holmes traces the mystery back to grudges originating in colonial India, while Watson tries to keep his growing emotions for their client in check.  Culminating with a steam launch chase, The Treasures of Agra deftly blends locked-room murders and exotic detail with romantic longing, requited and unrequited.

The Treasures of Agra primarily concerns Sir Arthur Conan Doyle’s The Sign of the Four.  Following a brief scene of Watson lamenting Holmes’s lapse on a prior case and the detective preoccupied with thoughts of a woman named Irene Adler, the pair agree to assist one Mary Morstan with two mysteries – the disappearance of her father a decade earlier and an anonymous benefactor who has sent her pearl each year for the last 6 years.  Morstan has received an invitation to meet with an unknown individual while accompanied by two friends.  Holmes and Watson attend Morstan’s meeting with her and meet Thaddeus Sholto, the son of a friend to Morstan’s father.  Sholto has knowledge of a treasure disputed over by their parents and that his twin brother Bartholomew has recently found.  Eager to divide the treasure and leave an older generation’s grudges in the past, they go to meet Bartholomew, only to discover him murdered by a poisoned thorn and the treasure missing.  Holmes deduces the murderers to be a one-legged man and a small companion and traces them to a boat landing and a small steamboat that is searched for and surveilled. 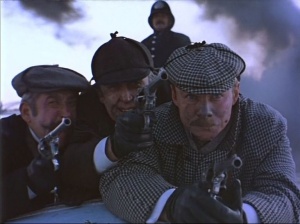 The second episode opens with Holmes again contemplating his prior case and depicts “A Scandal in Bohemia” in flashback.  Holmes and Watson are approached by the hereditary King of Bohemia to recover correspondence dating back to a relationship with an American opera singer, Irene Adler.  The King’s efforts to obtain the letters, both legal and illegal, have been unsuccessful and he seeks Holmes’s assistance out of fear his marriage to a Scandinavian princess will be scuttled should word of his previous liaison become public.  Holmes locates the letters in Adler’s residence and works out a plan to steal the correspondence with Watson’s help, however Adler realizes Holmes’s scheme and foils the theft, getting a note to Holmes that reveals her understanding and refuses to provide him with the letters, but assures their confidentiality.  Holmes relays the status of the correspondence to the relief of the King, however the detective is left wondering about the beautiful and canny woman who touched his life and vanished.  Having depicted the Adler case, the second episode returns back to the search for the Agra treasure.  With the help of the Baker Street Irregulars, a collection of street children Holmes sometimes employs, the steamboat is located and Holmes and Watson, with the help of Lestrade and his men, chase the one-legged man, Jonathan Small, and his pygmy associate upriver, eventually capturing Small but losing the treasure overboard.  Happily, the treasure’s loss clears the way for Watson and Mortan to admit their feelings for each and become engaged to be married.

The Treasures of Agra very much represents the practical challenges of leading an iconoclastic masculine identity.  Holmes and Watson, while admired and respected, rely on professionalism, adventuring, and mateship to root and define themselves.  Yet, for as successful or in demand as they may be, there remains an unexplored world of romantic intimacy that each are revealed to long for in their own fashions.  For Watson, his attraction to Mary Morstan is immediate and unexpected, although his gentlemanly nature fears her potential wealth will cast suspicion on his intentions.  Luckily for Watson, the source material and cinema’s draw toward heteronormative coupling work in his favour and he and Morstan surmount their challenges, seen happily married in Maslennikov’s following entry to the cycle.  Holmes’s situation is rather more melancholy, as his thoughts of Irene Adler seem conflicted between his admiration for her cunning, his frustration at her resistance to his plans, and his reservation (even rationalization) that romantic love would dull his intellect.  Still, his encounter with a beautiful woman capable of matching wits with him haunts Holmes and he is left thinking of the one that got in away in more ways than one.  The Treasures of Agra links Doyle’s two stories with questions about how long a life of bachelor adventuring can be maintained before the call of the home-fire leads to domesticity.

Holmes and Watson are, of course, not entirely alone in their escapades and the cycle’s recurring supporting cast deserve attention.  Rina Zelyonaya, a popular Soviet singer and actress, portrays Mrs. Hudson as Holmes’s unshakeable landlady willfully blind to the strange practices and dangerous situations before her.  Zelyonaya’s addition to the project put pressure on Maslennikov to expand her role, provide her with more lines, and even invent scenes for his highly regarded supporting star, however Maslennikov recounts Zelyonaya’s opposition to his plans, asserting, “No! What about your sense of balance?  I’m just ‘furniture’ in your beautiful scenery.  I like it; I have not played furniture before …”  Boris Brondukov’s Inspector Lestrade is a tenacious terrier of a man that is a joy to watch.  An easy target to portray as a villain (taking Holmes’s deserved credit) or an incompetent (unimaginative and conventional in his thinking, often to the detriment of the innocent), Lestrade is a potentially difficult figure to depict with depth.  Maslennikov expertly conveys Holmes’s fondness for the Inspector, able to reveal Lestrade’s bravery, assertiveness, and incorruptible nature.  In doing so, Lestrade is made a colleague with talents and qualities to be admired and recruited, rather than a dimwit to be exploited or mocked.  These recurring figures round out the world of Holmes and Watson, giving it colour, dimension, and unpredictability.  Zelyonaya and Brondukov get far less attention that Vasily Livanov or Vitaly Solomin, but their contribution is key and The Adventures of Sherlock Holmes and Dr. Watson are far richer for their presence.

Credits:  Again, quotes are taken from Maslennikov’s interview with Avrora magazine.  This film in the cycle is sometimes referred to as The Agra Treasure, but we’re using The Treasure of Agra simply out of preference.

2 thoughts on “The Adventures of Sherlock Holmes and Dr. Watson: The Treasures of Agra (Igor Maslennikov, 1983)”