The Criterion Collection, a continuing series of important classic and contemporary films presents The Stars Look Down.

Carol Reed’s adaptation of A. J. Cronin’s novel presents the hardscrabble existence of a northern England mining town. Davey Fenwick (Michael Redgrave) escapes the dangerous Scupper Flats seam for a college education and plans to improve the lot of his coal-mining community.  Trapped in an unhappy marriage and forced to return to his grimy home, Davey is embroiled in a labor dispute and then a mining disaster.  Starring Michael Redgrave and Margaret Lockwood on loan from Gainsborough Pictures to Grand National and filmed both on location and on elaborate sets at the Denham and Twickenham Studios, Reed invests The Stars Look Down with a gritty documentary look and a poetic naturalist style that garnered him international acclaim, launching him to further cinematic accomplishments.

A. J. Cronin’s 1935 polemic novel The Stars Look Down is a damning portrait of mining conditions in northern England and a cry for nationalization.  Cronin’s demand for increased regulation was presumably a controversial issue at the time, as the BFI’s discussion of Carol Reed’s film adaptation suggests that approval by the British Board of Censors likely only occurred due to the script’s treatment of the miners as complex, lacking unity, and given the owners being depicted as capable of redemption.  For his part, Reed had little interest in the nationalization cause, but embraced the dramatic possibilities of Cronin’s story.  The Stars Look Down was a box-office success for Reed, substantially increasing his regard in Britain and America and positioning him for further cinematic successes.  Eleven years after Cronin’s novel was published and 6 years after Reed’s film, the mines were nationalized in England.

The Stars Look Down is largely constituted by 3 primary sections.  The first portion establishes the mining community of Sleescale.  Davey Fenwick (Michael Redgrave) is an idealistic young miner readying to leave home with a scholarship to Baddeley College in Tynecastle and a desire to improve the dangerous and impoverished conditions of his community.  He assists his father, Bob Fenwick (Edward Rigby), in organizing a strike without the support of the union.  Bob has seen plans for the mine and fears flooding along the Scupper Flats seam.  The wildcat strike goes on 3 months and when a riot at a local butcher shop results in Bob Fenwick being wrongly arrested, the frustrated workers and union representatives seize the opportunity to break the weak resolve of the striking miners.  Davey leaves for college with well wishes from some and derision from others, including his own mother who sees his education as a waste compared to the dangerous, but stable and manly work in the mines.  This section is remarkably authentic, mixing location shooting with elaborate stage sets and a strong naturalist aesthetic.  Some remark that The Stars Look Down employs an editing style that emulates that of the British documentary tradition already established at that time.  Further, the disparate voices within the working class community adds to the film’s realism, avoiding an idealized image of the miners as a romantic collective struggling against their exploitation and emphasizing instead the material hardships that take precedence to many.

The middle section of The Stars Look Down moves to Tynecastle and takes on a decidedly melodramatic perspective.  Davey, away at college, runs into his boyhood chum Joe Gowlan (Emlyn Williams) who is living well as a turf accountant and is angling for a profitable position as a buyer for another mining company.  When his machinations pay off, Joe quickly casts off his unwanted girlfriend, the shallow Jenny Sunley (Margaret Lockwood).  Bereft at losing Joe and desperate for the security of marriage, Jenny quickly scoops up Davey and convinces him to leave school early and become a school teacher in Sleescale rather than carry on and complete his dream of working in the government to reform the mining industry.  Advancing to their unhappy marriage in Sleescale and Davey’s diminishing career prospects, the film relieves itself of its romantic agony when Davey discovers Joe and Jenny picking up where they left off and they each skip town.  The events are not without significance however, as Davey’s grudge against Joe is used to discredit him once he recommits himself to the miners’ cause.  This second portion plays like a comfortable studio picture and Davey’s doomed romance with Jenny has a tragic inevitability about it.  To Reed’s credit, The Stars Look Down offer no reversals of character, no discovered loves unearthed by adversity, and no personal epiphanies.  Hardship is simply the lot of the north English working class and, as the final section will prove, any advances made will unavoidably come at a high price.

Shortly after the union’s refusal to reconsider mining along the Scupper Flats seam, Bob Fenwick’s crew breaks through, flooding the mine, killing many and trapping Bob’s team, including Davey’s younger brother and Bob’s son, Hughie.  Davey, with the help of the mine’s owner, the union and other workers, desperately works to free the trapped miners, but days pass and the prospects of success grow dimmer.  This final portion is the best and most compelling section of The Stars Look Down.  The authenticity of the opening section returns, made even more powerful by the harrowing disaster unfolding.  Scenes of the trapped miners, black with coal dust and shining with sweat, are powerful and offer some of the best performances of the film.  The images of grimy rescuers leaving the pithead, loved ones standing vigil on the mine’s grounds, and street scenes of posted newspaper headlines counting the days of entombment have a documentary quality to them and transform the disaster from a plot development to a personal and material condition, one that is not merely an isolated event, but rather the most explicit consequence of the economic violence committed against Sleescale’s working class community throughout the film.  For as dramatic as the collapse and flooding of the mine is, it is presented as a continuation of the hardships experienced by these workers and their families, one that has always been present and that will apparently continue. 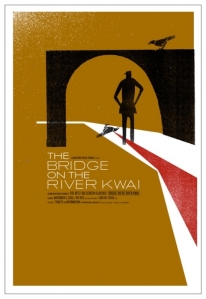 There are many reasons why The Stars Look Down would be an apt addition to the Criterion Collection.  It would perpetuate the Collection’s ongoing admiration of Reed, Redgrave, and Lockwood, and offer an interesting contrast with Reed’s commercially appealing, high adventure favourite Night Train to Munich.  It would also connect to those British films in the social realist style born in the mid-1950s and holding Criterion spine numbers.  With regard to cover art, I’m quite fond of Jeff Kleinsmith‘s graphic, minimalist poster for David Lean’s The Bridge on the River Kwai (1957).  With the dramatic angles of the pithead’s architecture and the stark contrasts of light and darkness in the mine’s interior, The Stars Look Down would lend itself well to Kleinsmith’s approach, its modernist abstraction embodying the social and economic tensions of late modernity.

Credits:  I originally intended on including an interview on The Stars Look Down with a socially and politically conscious filmmaker like Ken Loach, but, unable to locate a director who has championed the film, I decided on an interview with Stephen Daldry, whose film Billy Elliot is also inspired by Cronin’s novel.  I can only hope that Daldry is a fan of The Stars Look Down and trust that the significant differences between the 2 films sharing the same source material will make for some interesting observations.  The American version includes bookending voiceovers by Lionel Barrymore heavy with religious reverence and truncates the film’s ending, omitting a sombre and resigned Davey going to work at the union.  Access to both versions would be a beneficial addition to a Criterion release as the American version has become the predominant edition of The Stars Look Down.  The Omnibus documentary on Michael Redgrave, based on Corin Redgrave’s biography, is purportedly a strong review of the actor’s career and notable for addressing his bisexuality.  Dave Berry’s list “Top 10 Welsh Performances” and his highly complimentary discussion of The Stars Look Down and Emlyn Williams’ portrayal of Joe made him a suitable booklet essay author, while Graham Greene’s review as a film critic for The Spectator lavishly praises the film.  Greene would later script Reed’s The Fallen Idol (1949) and The Third Man (1949), both holders of Criterion spine numbers.